Each summer, 90 undergraduate and alumni members from across the United States cycle 4,000 miles from the west coast to Washington, D.C. participating in activities and events to promote a greater understanding of people with disabilities. Through team member fundraising and corporate sponsorships, the event raises more than $600,000. Along the journey, riders participate in service projects and raising awareness about disabilities. There are now three routes on the Journey of Hope: North, South, and Trans America.

Gear Up Florida cycles through Florida communities to raise funds and awareness for people with disabilities. Every Summer 35 undergraduates and alumni of Pi Kappa Phi cycle 800 miles through 13 cities before ending in Tallahassee. Gear Up Florida raises more than $75,000, through team member fundraising and corporate sponsorships. 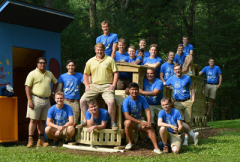 Build America is a six-week summer program where members of Pi Kappa Phi construct accessible environments at six camps that support people with disabilities across the country. Team members have the opportunity for extended personal interaction with the campers who benefit from their hard work, making this a very unique and life enriching experience for all involved. 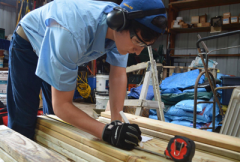 Ability Camps provide undergraduate members the opportunity to spend a high quality Spring Break renovating camps and building accessible environments that will enhance the summer camp experience of a person with a disability. This alternative spring break is programmed around hard work, volunteerism, leadership, brotherhood, and fun.

Ability Weekends are national service programs that provide funding and manpower to build and renovate structures such as accessible fishing piers, boardwalks, pavilions and playgrounds for facilities that support people with disabilities.

The Ability Experience Challenge is a campaign giving everyone the opportunity to display their human ability by competing in endurance events across the country and raising funds and awareness for people with disabilities. The challenge is designed to provide an opportunity for people to take an unselfish approach to endurance competition.