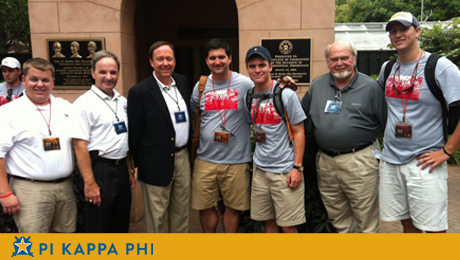 Two up-and-coming student leaders at NSU now have the tools essential to revitalize their campus Greek system and growing leaders within their chapter. Pi Kappa Phi President Scott Mayeaux and member Ryan Jeffords were among 60 Pi Kappa Phi’s from across the country selected for Pi Kapp College 2011.

Pi Kapp College is designated as Pi Kappa Phi’s premier leadership program and serves as a transformational experience designed to challenge and empower members to become better leaders and better men. Each summer, emerging leaders from across America converge on the birthplace of Pi Kappa Phi for an intensive, six-day experience created to explore the principles of leadership and the values of Pi Kappa Phi.

The NSU delegation arrived in Charleston, South Carolina on June 13th for a week of team-building exercises and symposiums designed to empower emerging leaders. Each day consisted of lively discussion and experiential activities on leadership themes. Some highlights include team building activities, brotherhood activities, discussion and dialogue around Ritual of Initiation and community service.

Getting to this point was a difficult feat. Pi Kappa Phi Foundation Senior Director of Alumni Development Steve Evans said hundreds of students were considered through a rigorous application process. “With only 60 slots available, having more than one student attend is a great honor and something the chapter can take some pride in.”

In a panel discussion, alumnus Steve Whitby helped students realize the impact that one member can have on the future of their chapter. “You have to realize your chapter will be there long after you are gone. You have to make up your mind today whether you are going to be a part of it being successful or it failing. Realize, you are one link in an unbroken chain.”

Mayeaux recently completed his first semester as President of the Beta Omicron Chapter. He has guided Pi Kappa Phi to an unprescedented second consecutive year holding the NSU President’s Cup, an award recognizing the top Greek organization at Northwestern State. Pi Kapp College 2011 was a transformative experience for him. “Walking the campus of the College of Charleston gives me such pride of being a Pi Kapp,” said Mayeaux. “Seeing where it all began, the gifts and how Pi Kapp is all over this city makes every brother feel like they’re home.”

Jeffords is relatively new to Pi Kappa Phi, having initiated in December, 2010. He is already making a choice to lead by accepting the role housing manager for the chapter house. Jeffords says leadership training is an important part of Pi Kappa Phi Fraternity. “Beta Omicron has four NSU orientation leaders this summer, all made possible through the values they were taught as associate members. This is the part of being a Pi Kapp that makes me so proud and truly overwhelms me.” Jeffords and Mayeaux left Pi Kapp College with a more thorough understanding of their commitment to Pi Kappa Phi and empowered to live up to those commitments in their chapter and the Natchitoches community.

Among those motivating students were Beta Omicron chapter alumni. Re-founding archon Wes Breeden joined the Pi Kapp College faculty, applying his experiences with Pi Kapp and his successes in the business world. Nick Breaux, a program consultant for Push America, explained how serving people with disabilities has impacted his fraternal experience.

Pi Kapp College 2011 coincided with the National Fraternity’s summer alumni reunion on June 18th, also in Charleston. Dozens of alumni from various chapters and their families spent the weekend reconnecting with old friends and connect their fraternity. Social gatherings and touring Charleston were just a small part of a full schedule of events. Beta Omicron chapter alumni in attendance included Larry Gracie and his wife Joan, David D. Morgan, Sr. and his wife Sherry, Wes Breeden, and Nick Breaux.