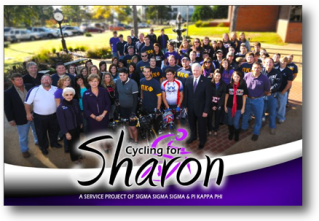 Two Northwestern State University Greek organizations will honor the memory of deceased alumni by completing an annual cycling trek across Natchitoches Parish during this year’s Homecoming events. Members of Pi Kappa Phi Fraternity and Sigma Sigma Sigma Sorority will ride in memory of the late Sharon Sampité and the late Joe Sampité to raise funds for the Sharon Sampité, John and Allison Van Hoof Educational Scholarship administered through the NSU Foundation and the Sampité Family Baseball Scholarship administered through the NSU Athletic Association. Participants will complete the annual service project Saturday, Oct. 27 with a 9:30 a.m. ceremony at the Alumni Plaza. The public is invited to attend.

Sharon Sampité (1961-2009) graduated from Northwestern State in 1985 and 1986 was an alumna of Sigma Sigma Sigma. During her life, she inspired many with her dedication to service, pride in the city of Natchitoches and her love of her alma mater. Following her diagnosis with cancer in 2006, she was instrumental in organizing area cancer outreach and support groups to mentor other cancer patients.

After Sharon’s death in 2009, members of Tri Sigma and Pi Kappa Phi approached her father, Joe Sampité (1931-2012), a 1959 graduate of Northwestern and alumnus of Pi Kappa Phi, about coordinating a bicycle trek in Sharon’s memory. Joe Sampité, who served as mayor of Natchitoches for 20 years, was known throughout the state for his white socks, “I Love Natchitoches” stickers and service to his church, community and Northwestern State.

The first Cycling for Sharon event was held in 2009 as a donation-based event with members of Pi Kappa Phi and Tri Sigma raising money for scholarships. Joe Sampité remained involved with the project until his death in May.

“The Sampité family has greatly affected the city of Natchitoches. Their impact is felt on a daily basis,” said Ryan Bonnet, Pi Kappa Phi – Beta Omicron chapter secretary and student coordinator of this year’s Cycling for Sharon. “We are honored to include Mr. Sampité in our brotherhood and will continue to spread Sharon’s message in an attempt to foster awareness and action.”

Cyclists will ride over 22 miles following a course south on Kyser Avenue to Natchez and back to Natchitoches via Hwy. 1, where they will stop for a brief rest at the Pi Kappa Phi House on University Parkway, then proceed to the Pi Kappa Phi Clock in the Alumni Plaza for the ceremony. Volunteers interested in assisting the crew following the cyclists are welcome.

“Sigma Sigma Sigma Sorority is more than excited to be part of this year’s Cycling for Sharon event,” stated Lauren Waguespack and Shannon Byrd, spokeswomen for Sigma Sigma Sigma. “Sharon was a model Tri Sigma and her service to the community and the chapter left a legacy that we are so proud to support. It is a humbling experience to watch riders trek across Natchitoches Parish and meet at the clock in honor of her life. This year, we are sure the event is going to be a success and will allow us to remember Joe Sampité, who played such a vital role in this project. Oct. 27 is going to be a very special day,”

For more information or to make a contribution, visit http://www.pikappnsu.org/aboutus/service/cyclingforsharon or e-mail pikappbo1956@yahoo.com. There is also a Facebook page dedicated to Cycling for Sharon where individuals can RSVP for the event. That page is http://www.facebook.com/events/379378008801547 .

[This news release is from the Northwestern State University News Bureau]