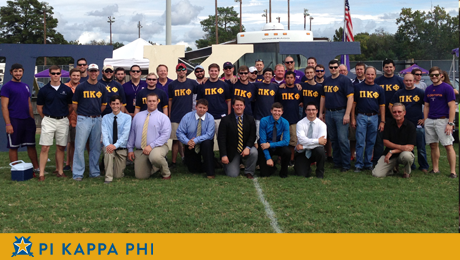 A week of gatherings reunited Pi Kappa Phi Fraternity brothers, spouses, and guests from around the country, returning to their alma mater to celebrate NSU Homecoming on October 7-11, 2014.

The festivities began Tuesday with Pi Kapps joining more than 500 other Demon fans for the Homecoming Bonfire and Concert at the base of Greek Hill and the Intramural Department’s Electric 5K Glow Run. Wednesday featured the ‘Let’s Rave’ Neon Glow Party at Iberville Green, followed by Pi Kappa Phi going head-to-head with other Greeks and student organizations in the annual lip sync contest in A.A. Fredericks Auditorium on Thursday night.

Earlier Thursday, Beta Omicron Chapter alumnus Wes Breeden spoke to a crowd of students at Northwestern State University’s 48th annual J. Walter Porter Forum sponsored by the School of Business. Breeden, a 2003 NSU graduate is regional vice president for the Association Member Benefits Advisors, which specializes in benefits for the largest state and teacher retirement association in the country. He volunteers with students to develop organizational and leadership abilities. “You are not special and you are not unique,” Breeden told students. “The quicker you realize that, the quicker you can get on your career path.” According to Breeden, successful individuals maximize the 1 percent that makes them different from all others.“ Have a goal, have a plan, have a positive attitude and create action. Do it now,” he said. “The goals have to be yours. It’s better to aim high and miss than to aim low and hit it every time. There are clearly defined winners and losers. Keep pushing. Be fireproof, bulletproof and waterproof. It’s not easy. What you do with that 1 percent can make an unbelievable life.”

That afternoon, Beta Omicron Chapter members participated in the annual Homecoming Parade and Pep Rally on the Downtown Riverbank. Pi Kapps dressed as various musicians and celebrities, riding in a Hollywood Squares-style float. Following the parade, a pep rally included performances by the NSU cheerleaders, Demon Dazzlers, pom pon line, and the Spirit of Northwestern Demon Marching Band; the introduction of the Homecoming Court and an appearance by Head Football Coach Jay Thomas, senior football players and the NSU mascot, Vic the Demon. Afterward, dozens of Pi Kappa Phi members, alumni, and their families gathered on the banks of scenic Cane River for the ‘Rockin’ on the Riverbank’ festival, enjoying the music of the Chee-Weez and swapping stories about their experiences in the fraternity.

Saturday morning began bright and early with an alumni breakfast at the chapter house across from the Northwestern State University campus. Meantime, members of Pi Kappa Phi and Sigma Sigma Sigma Sorority had already begun a 25-mile trek across Natchitoches Parish to the Pi Kapp clock at the NSU Alumni Plaza. The 6th annual ride honors the memory of Sharon Sampite, daughter of Beta Omicron alumnus Joe Sampite. Sharon lost her battle with cancer in 2009. The ride concluded a fundraising effort by members of both groups, which raised more than $567 to a scholarship fund in her memory.

Following the presentation, Beta Omicron Chapter alumnus David Morgan, Sr. presented scholarships to members who go the “extra mile.” Sean Austin, Anthony Hunter, Zack Cockerham, and Kolt Kays were awarded more than $2,000 for their efforts in the classroom, service to Pi Kappa Phi, and participation in the NSU campus community. The Morgan ‘Extra Mile’ Scholarship Program seeks to recognize academic performance while encouraging active and sustained involvement in NSU, all while remaining active in the affairs and operation of the chapter. Associate member Thomas Robinson was awarded $500 as the recipient of the NSU ‘Freshman Leadership Scholarship,’ sponsored by the Beta Omicron Alumni Chapter.

The fun and fellowship continued at the Demon Commons, where excitement for the game was stirring at the Pi Kapp tailgating tent. Beta Omicron Parents Club chairwoman Vivian Cockerham prepared an impressive spread of favorite Louisiana recipes, which kept people coming back for seconds. Dozens of Pi Kapps, their families, and friends enjoyed corn hole and flag football before heading to Turpin Stadium to watch the Demons dominate the UIW Cardinals in a 49-12 victory.

Safe travels for the 2020 EC as they are off to Dallas for Pi Kapp College!
Rush week is right around the corner! Make sure to stop by the Pi Kapp house to get to know the men of Pi Kappa Phi. If you have any questions please contact our head of recruitment Jacob Norris at 318-403-9560.⭐️ ⚔️
Congratulations to Pi Kappa Phi alumnus Cody Bourque (BO 435) and his beautiful bride, the former Allison Beard. They were married on December 8 at New Orleans' Church of the Immaculate Conception and even had a second line down Canal Street to their reception! Several Pi Kapp brothers were in attendance. Wishing you both a lifetime of happiness!
The Brothers of Pi Kappa Phi would like to wish everyone a Merry Christmas !🎄🎁 #ΠΚΦ
Happy Founders Day! On this day 115 years ago, three men chose to lead. Today we stand with over 100,000 alumni and over 11,000 active undergraduate members. ⭐️ ⚔️ #ΠΚΦ
Happy Thanksgiving from all the Brothers of Pi Kappa Phi! 🦃🍁🍽 #ΠΚΦ
My Tweets