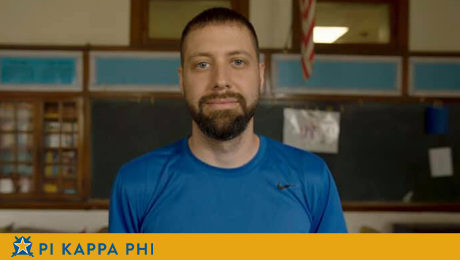 For many teachers, the profession isn’t just a job, it’s a vocation in life. Achieving this great reward can come at the expense of personal sacrifice in many forms.

The short-form documentary series ‘American Paycheck,’ a production of Million Stories Media, profiles Northwestern State University alumni Randy Smith and Kimberly Eckert, among others, to shed light on what it means to to be a teacher in Louisiana.

Million Stories Media bills itself as a new entertainment and lifestyle channel that’s about young Americans today. “We talk about career, money and family in a real way and we feature real people and their stories.”

The 2007 graduate of NSU teaches Civics and AP Government and Politics at Bolton High School in Alexandria, Louisiana. As a single father of two, Smith says it’s necessary for him to find secondary employment to provide for his family.

According to the U.S. Department of Labor, 20 percent of American teachers hold side jobs to make ends meet. In Louisiana, educators make $10 thousand less than the national average, the documentary reported.

When Smith leaves campus each afternoon, his day isn’t over. He works part-time busing tables at a restaurant, for a relative’s landscaping business, and seasonally at a fireworks stand to make up for the wage gap. He holds these jobs to ensure that he can continue pursuing his passion — shaping young minds.

“Teaching is about half of what you do every day. You counsel and you mentor and help people the other half of your day.”

Eckert, who called Smith a phenomenal” and hard-working teacher, says the documentary gives a true look at why they teach.

“An incredible production team shot an inspired 8-minute short that honors the teaching profession and speaks to the urgency and importance of it, while also giving a raw and honest look about teacher pay and the need for recruitment.”

Smith said it was fun having the film crew follow him around and is pleased with the final product.

“I’m hoping it sheds some real light on what it means to be a teacher in this state.”