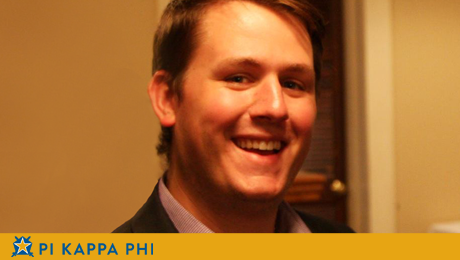 Beta Omicron Chapter’s Thomas Marlbrough is among six juniors and seniors in the nation selected for the Pi Kapp Scholars Award, the oldest and most prestigious scholarship in Pi Kappa Phi Fraternity.

For over eight decades, the Pi Kapp Scholars Award has been recognizing promising student leaders for their commitment to academic excellence during their undergraduate career.

The award is intended to recognize and reinforce the idea that to lead in one’s chapter is to first lead in the classroom. In addition, President John F. Kennedy often said that fifty percent of a person’s education takes place outside of the classroom. Because of this, applicants’ extra curricular activities are also considered in the award process.

Following the tough evaluation of eligible applicants, the Pi Kappa Phi Foundation selects only a handful of students for this award each spring semester. To be eligible, an applicant must be an initiated member of Pi Kappa Phi Fraternity, be enrolled as a full-time junior or senior at his university, have a cumulative GPA of 3.3 or higher. Recipients receive $1,000 grants.

Marlbrough, a senior History major from Mandeville, Louisiana, has earned a 3.5 GPA. He has served as archon of the Beta Omicron Chapter since 2016 and previously served as vice archon and secretary. In 2016, he was named NSU ‘Greek Man of the Year’ after serving as Interfraternity Council president and vice president of judicial affairs. Last Summer Thomas cycled across the country as part of the Journey of Hope, which raises funds and awareness for projects that support people with disabilities through Pi Kappa Phi’s philanthropy, The Ability Experience. In 2015, he was was awarded the he Undergraduate Interfraternity Institute (UIFI) scholarship by the North American Inter-Fraternity Conference and received Pi Kappa Phi’s David D. Morgan ‘Extra Mile’ scholarship in 2015 and 2016. Marlbrough has also been involved in Northwestern State’s ROTC program, Student Government Association, Phi Alpha Theta, President’s Leadership Program, and has served as a Freshman Connector.