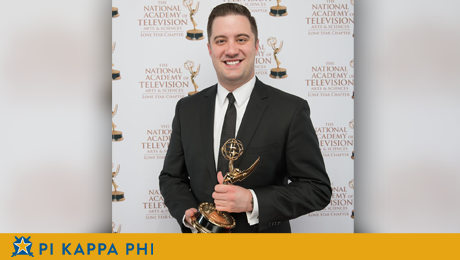 Lane Luckie, an alumnus of the Beta Omicron Chapter of Pi Kappa Phi Fraternity at NSU, was recently honored with an Emmy Award for news coverage of the 2016 Dallas Police ambush.

Luckie and his colleagues at KLTV, the ABC affiliate in Tyler, Texas, were awarded a Regional Emmy from the Lone Star Chapter of the National Academy of Television Arts & Sciences for Outstanding achievement in Morning/Daytime Newscast – Smaller Markets (61+).

He has served as an anchor and reporter for the station since 2012.

“We have a tremendously talented and dedicated morning news team,” he said. “Our viewers have come to trust KLTV for exceptional coverage of stories that have far-reaching impacts. That comes with great responsibility, but we’re up for the challenge of keeping our community informed and educated.”