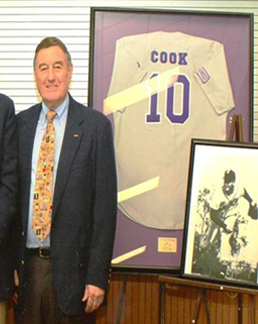 Cook and fellow baseball standout Jim Willis will have their NSU Baseball numbers retired. They will join two others as the only numbers retired in NSU baseball history. Their retired numbers will be displayed on the outfield wall at Brown-Stroud Field.

After the Baseball Banquet, Cook was honored again with plaques from both the Pi Kappa Phi undergraduate chapter and the Alumni Founders Group. A baseball signed by Cook will be displayed in the Chapter House to commemorate his accomplishment.

Cook was a record-shattering pitcher for the Demons who had 29 victories from 1956-59, still a school record 50 years later.  He was a dominating factor in Gulf States Conference play. A three-time All-GSC pitcher, Cook posted an 8-1 record in 1956 and led the nation in wins in 1957 after compiling a 10-1 record and earning most valuable player honors in the conference. Nicknamed the team’s “Iron Man” by the NSU Current Sauce newspaper, Cook took victories in two doubleheaders during the 1957 team.

Cook earned his Bachelor’s Degree from Northwestern State University and his Master’s from Kansas State University. He is a retired military officer and earned the Bronze Star with Oak Leaf Cluster after serving in Vietnam. Cook played semi-pro baseball with Homer in the Big Eight for two summers while in college, with an 8-5 record. He married his high school sweetheart from Natchitoches, Mary Ellen (LaCaze) Cook. They have four sons, all married, and have nine grandchildren living near them in Smithfield, Virginia.

Number of walked batters were few, but cannot substantiate a number, except for 1957: 10 walks in 11 games.

Winningest pitcher in the nation in 1957; ranked as 3d highest winning percentage of all pitchers in small colleges per National Collegiate Athletic Bureau in 1957.

Named “Iron Man” for pitching 2 double headers: one in 1957 and one in 1958; pitched a double shutout in one of the doubleheaders.