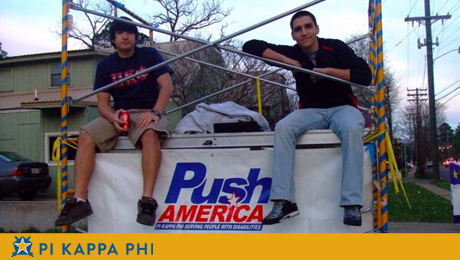 Pi Kappa Phi Fraternity continued their commitment to Push America by “doing whatever it takes.” To raise awareness for people with disabilities, members of the Beta Omicron chapter camped out on a scaffold from March 2-4.

The attention-getting event involved over 40 participants sitting on or around the Chapter House on University Parkway.

During the day and throughout the night, members reached out the Natchitoches community by enticing cars to honk for Push America.

This was the first time member Chris Whetmore had participated in a Push America event.  He said, “I thought this was a different and creative way to raise awareness for Push America. It caught a lot of peoples’ attention.” Members of other fraternities, sororities, campus organizations, and fellow students took turns sitting on the scaffold.

The chapter helped educate participants about disabilities by passing out educational materials and collecting donations for Push America, the national philanthropy of the Fraternity.

The event raised over $700 for projects to support people with disabilities.