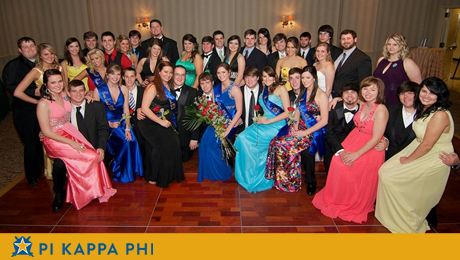 In what has become a much-anticipated tradition, the Beta Omicron chapter returned to New Orleans in 2012 for the fraternity’s annual Rose Ball formal.

March 16-17, members and their dates descended on the Big Easy for a weekend of touring the historic French Quarter and colorful Bourbon Street, tasting authentic cuisine, and taking in the music that defines the city’s spirit.

A banquet held in the DoubleTree Hotel on Canal Street was the highlight of the weekend.

Following a catered meal, several members were honored for their contributions in the last year. The “Mister Pi Kappa Phi” award was given to Chris Alley. “Bleeds Blue and Gold” went to Cameron Moises. Archon Ryan Jeffords was named “Active of the Year,” while Tyler Holdsworth received “Associate of the Year.” Scott Mayeaux was recognized for his dedication as a senior with the Kroeg Award. Chase Harvey received the Mixson Award for excellence in campus involvement. The Fogarty Award for excellence in scholarship went to Kevin Bruce.

Before the dance, several ladies received special recognition. Members, on one knee, serenaded Whitney Irvin as 2012 Rose Queen. Others named to the Rose Court were Anne Bergeron, Amy Pogue, and Brittany Root.