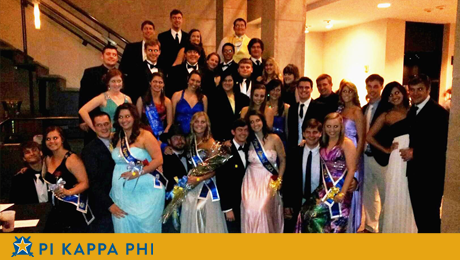 A weekend of lasting memories were made at Pi Kappa Phi’s annual Rose Ball Formal in New Orleans, Louisiana. Keeping with tradition, the Beta Omicron Chapter returned to the Crescent City April 19-20th, 2013.

On Friday, members, their dates, alumni, and families explored the shops & restaurants of the French Quarter at. That night, the Pi Kapps made their way into the heart of the city for a night on the town, whether taking in a dark jazz club or exploring the excitement of Bourbon Street.

For man, Saturday began with a breakfast of beignets and cafe au lait at Cafe Du Monde. Others took in street performers in Jackson Square, followed by a walk through the French Market. Fresh seafood was on the menu for lunch, later exploring The National D-Day Museum, Audubon Zoo, The Cabildo & Presbytere, and the Aquarium of the Americas are just a few favorites.

Saturday night, the banquet and formal got underway at the dazzling Ogden Museum of Southern Art, home to the most comprehensive collection of Southern art in the world.

Attendees were given private access to the galleries on all three floors of the museum, including the rooftop dining area for a catered meal.

Following dinner, several members were honored for their contributions in the last year. The “Mister Pi Kappa Phi” award was given to Scott Mayeaux. Aaron Finimore was named “Active of the Year,” while Zack Cockerham received “Associate of the Year.” Tyler Stahl was recognized for his dedication as a senior with the Kroeg Award. Kolt Kays received the Mixson Award for excellence in campus involvement. The Fogarty Award for excellence in scholarship went to Jake Bryan.

Each year the Beta Omicron Chapter selects one woman as the fraternity sweetheart, known as the Rose Queen. This honorary title signifies a woman who embodies class, character, and elegance. The “Rose” is given a bouquet of the official flower of Pi Kappa Phi, the red rose. Members, on one knee, then serenaded Kathryn Rogers as the 2013 Rose Queen. Other members named to the Rose Court were Megan Duhon, Anne Bergeron, Lizzie Hilgerson and Frances Saurage.