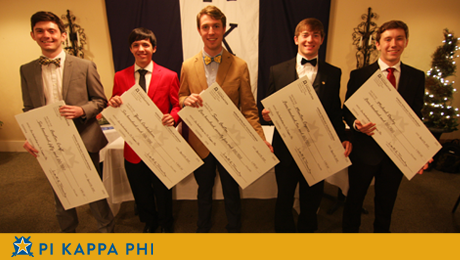 Placing an emphasis on excellence in academic, campus involvement, leadership, service, and employment is paying off for Pi Kappa Phi Fraternity students at Northwestern State University.

The Morgan “Extra Mile” Scholarship Program is funded by and named for Beta Omicron chapter alumnus David D. Morgan. An entrepreneur, an insurance executive, and a leader within his industry and his fraternity, Morgan has spent a considerable portion of his life helping others to be successful.

Whether through the offering of insurance products to association members across the country that help provide a greater peace of mind, or through his volunteer work with several Pi Kappa Phi chapters, Brother Morgan’s commitment to helping people (especially his Pi Kappa Phi brothers) is a trademark of his personality. Instilling the lessons he learned growing up in Louisiana – lessons of hard work, industriousness, and self-determination – into the heart of this initiative, the Pi Kappa Phi Foundation created the scholarship program in 2008.

In the time since, the program has furthered the academic pursuits of more than 40 NSU students in awards exceeding $40,000. Earlier this year, the success of the ‘Extra Mile’ scholarship at NSU went nationwide. Funded by a million-dollar endowed gift from Morgan, the scholarship is now available to more than 10,000 Pi Kapp students at over 180 campuses across the country.

Recipients are selected through a rigorous application process that awards points for campus and chapter leadership, grades, employment, and a series of essay questions. This program seeks to recognize the effort and seriousness that a student displays in pursuit of academic excellence. But just as important as a student’s scholastic prowess, however, is their commitment to applying themselves in the classroom and in life outside of the classroom by going the ‘extra mile.’

Pi Kappa Phi’s leadership programs like the Morgan ‘Extra Mile’ have provided uncommon opportunities for members like senior Austin Craft, who found his own definition of success as a student leader. “Success isn’t always a measurable standard. It’s whatever we believe it is.” An important learning lesson for Craft came during his time as the chapter treasurer. “It’s never the perfect time to do something, but we must push through any obstacles and accomplish what we set out to do.”

Underscoring the purpose and mission of the program, friend of the Fraternity and NSU Dean of Students Frances Conine delivered the keynote address. Conine arrived at NSU in 1981, first serving as Coordinator of the College Success Program, then Educational Coordinator of NSU’s Central Louisiana programs, Director of Counseling and Career Services, Director of Student Services and Judicial Affairs, and Executive Director of Student Development and Student Conduct. She has been a faculty member in the College of Education and Human Development since 1996 and was named Dean of Students in 2013. She is a licensed professional counselor, marriage and family counselor and certified mediator.

Conine has been a member of the Pi Kappa Phi “family” her entire life. Her father, the late John C. Watkins was the archon of the Omicron chapter at the University of Alabama in the 1940s. She was named honorary house mother for the Beta Omicron chapter at NSU in the mid 2000s.

For information on how to apply for the scholarship, click here.