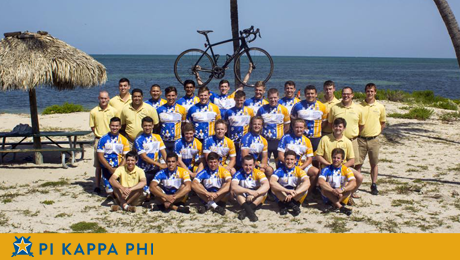 The cycling trek lasts only two weeks, but the lives touched along the 865-miles of Gear Up Florida’s route won’t soon forget Pi Kappa Phi members like Sean Austin, Zack Cockerham, and Austin Craft. The Northwestern State University students were among the 31 cyclists and crew members riding across the State of Florida to re-shape the perception of people with disabilities. 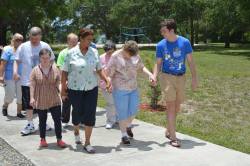 Austin Craft and members of the Gear Up Florida team spread a message of acceptance and understanding of people with disabilities.

On Sunday May 10, 2015, the cycling event kicked off on the shores of Miami, traveled through the Florida orange fields, reached the Gulf coast, passed through Orlando, wound back to the Atlantic coast and culminated at the State Capitol in Tallahassee. The team spread a message of acceptance and understanding to communities in Florida through newspapers, radio and television, civic groups and community leaders, reaching millions of people. Cyclists pedaled an average 80 miles each day, before participating in a ‘friendship visit’ with an organization that serves people with disabilities in each community. The Ability Experience, Pi Kappa Phi Fraternity’s philanthropy, provides each of these non-profits with a grant before departing the next day.

The three NSU team members served as crew members, responsible for logistical needs ranging from bicycle maintenance, cyclist support and safety, media relations, to mapping the daily cycling route. Cockerham, a History and Liberal Arts major from Morgan City, Louisiana, raised $1,050 toward the team’s $70 thousand collective fundraising effort, which will directly benefit people with disabilities.  This experience was years in-the-making, he said. “I was first drawn to Greek life and Pi Kappa Phi because of the leadership opportunities it provided as well as its philanthropy. Participating in one of the Ability Experience’s summer events has always been a goal of mine since I joined Pi Kappa Phi in 2012.”

NSU Pi Kapp Zack Cockerham said his visit to the Easter Seals was a humbling experience. “I was honored to meet some truly amazing individuals who have lived extraordinary lives. “

Having previously cycled with the 2013 Gear Up Florida team, Austin, a Health and Physical Education major from DeRidder, Louisiana, returned as a crew member. He contributed $1,250 in fundraising. Craft, a Business Administration major also from DeRidder, raised $1,525 as a crew member for the trek. Team members are selected through a rigorous application process, which included a one-thousand word essay and phone interview.

Gear Up Florida’s programming is what makes this event so unique, with every event centered on the mission of the trek. Some days, team members will visit three different organizations that support people with disabilities. Seeing the direct impact on the people they raise money for is very emotional for team members. Many cannot help but be touched by the gratitude and kindness that is shown along Gear Up Florida.

The trek provides a heavy dose of life perspective that leaves participants inspired and motivated to do more for people with disabilities in their own communities.

The NSU Pi Kapps carried flags of the sororities that support projects of The Ability Experience in Natchitoches.

As a way of thanking the NSU sororities that support the projects on behalf of the Ability Experience in Natchitoches, the team carried flags that were signed by supporters along the route. The NSU Pi Kapps plans to present the flags to the sororities this Fall.

Since Gear Up Florida’s creation in 1997, more than 350 Pi Kappa Phi members have participated, including 12 NSU students. Cockerham said this experience will remain in his heart for the rest of his life. “My experiences today taught me a lot about humility and love, and it helped me put a lot of things in my life into perspective. I am truly honored to be here with my fellow brothers, and I am proud to be a Pi Kappa Phi.”

The following is an excerpt from Cockerham’s contribution to the 2015 team journal:

DAY 12 | ZACK COCKERHAM: Today was truly a humbling experience. During breakfast and our first Friendship Visit today with the Easter Seals, I was honored to meet some truly amazing individuals who have lived extraordinary lives. The event was with mostly elderly individuals, and speaking with them really helped put a lot of things in perspective for me. I talked with Bob, who has been going to the Easter Seals for many years now, for almost two hours. He told me stories of his time in the military, his service in the Vietnam War, his sibling and his children, and many of the places he visited during his youth. We bonded over a variety of subjects: music, military history, the love of travel and adventure. He kept telling me his life motto “always be kind to others, and if they don’t return your kindness just walk away. Go back to them another time.”

After we left the Easter Seals we went to the Russell Home, which was truly an amazing experience. I had never seen a facility anything like that before. Instead of an actual medical or state run facility, it was literally a house where a family cared for individuals with disabilities. The people they served where as happy as they could be, and the atmosphere throughout the house was one of kindness and love. I was nearly in tears by the time I left the Russell Home — absolutely blown away by the work they were accomplishing there. When we arrived back at the hotel, I was stunned when I was awarded the rock, an important symbol for the men on this trip. It was truly an honor to learn how highly my peers think of me, and that my presence here on the trip has made a lasting impact with each and everyone of them.  Today was truly a humbling experience, from discussing military history with Bob to touring the Russell Home. My experiences today taught me a lot about humility and love, and it helped me put a lot of things in my life into perspective. I am truly honored to be here with my fellow brothers, and I am proud to be a Pi Kappa Phi.

[Portions of this article from http://www.abilityexperience.org]