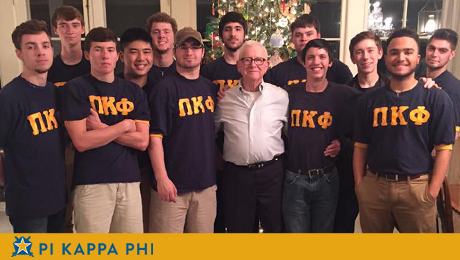 The newest initiate of Pi Kappa Phi Fraternity at Northwestern State University has a unique connection to the chapter’s earliest members. Jim Bob Key was one of the last members of Phi Kappa Nu, a local fraternity that affiliated with Pi Kappa Phi, becoming the Beta Omicron Chapter in 1956. Key joined Phi Kappa Nu in 1952 and initiated as the 576th member of the Beta Omicron Chapter more than 60 years later, on December 7, 2015.

A native of Winnfield, Key graduated from Northwestern State with a Bachelor of Arts in art and interior design in 1954. While at NSU, he played percussion in the band and timpani in the symphony and was a member Phi Mu Alpha Sinfonia. 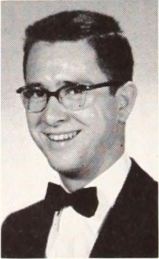 Key was instrumental in the creation of the Natchitoches-Northwestern Symphony Orchestra and for 50 years has been a key member of the Symphony Society, which works to create scholarships for music students. Among his many endeavors, Key also served on the Council of the Metropolitan Opera, the Regional Boards of Shreveport Symphony and Shreveport Opera and the Louisiana State Arts Council which started the Louisiana Outdoor Drama Association amphitheater at Grand Ecore. A long-time supporter of Northwestern State University’s School of Creative and Performing Arts, Key was inducted into the CAPA Hall of Fame in 2015.

Key has three daughters, eight grandchildren, and is also the proud great-grandfather to three.

Key got to know several of the student members of Pi Kappa Phi after meeting at a Natchitoches restaurant, striking up a conversation about Phi Kappa Nu and Pi Kappa Phi. He says he thinks fraternities remain relevant due to the lessons they teach young leaders through uncommon opportunities. “These social outlets will open up avenues, allowing young men to make connections and life-long friendships.  Social fraternities will always prevail as long as you keep the chapter active and full of outstanding young men.”