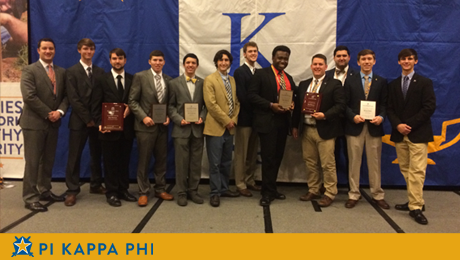 Pi Kappa Phi Fraternity members from Northwestern State University are returning to campus with a road map for success in 2016. Over the weekend of January 15-17, the NSU Pi Kapps joined more than 300 students, staff and volunteers from around the nation to take part in Pi Kapp College for Chapter Officers in Birmingham, Alabama.

NSU students Tyler Robinson, Thomas Marlbrough, TJ O’Rourke, Noah Baudoin, David Johnson, Will Welch, Michael Dailey, Joseph Magnan, Dalton Randolph, and Zack Cockerham attended the conference. These newly elected officers were challenged to think about how they will demonstrate the courage to make positive choices, act on their values, and develop a commitment to excellence.

Pi Kappa Phi alumnus and renowned speaker TJ Sullivan (Indiana) delivered his keynote address, Motivating the Middle, which encourages student leaders to stop focusing on their bottom third members, those who check out or cause problems, and start focusing on the “middle third members” who hate drama, care for their organization, and prefer to play a supporting role. He challenged the newly-elected officers to direct their efforts toward the middle — and understand what makes them different, what gets them engaged, and what they can contribute.

Chapters that found success in all areas of chapter operations in 2015 were recognized at Pi Kapp College. Beta Omicron Chapter at Northwestern State University received ‘Master Chapter’ status in the areas of Branding and Communication, as well as Campus Involvement. The delegation was also recognized with the ‘Retention Excellence’ award, the ‘Outstanding Branding and Communications Award,’ as well as the ‘Excellence in Advising’ award for the alumni chapter’s dedication to meaningful mentoring opportunities with students.

Beta Omicron chapter alumni also served in support roles at the conference, volunteering as facilitators. In Birmingham, Wes Breeden was a facilitator for the Archon track and Lane Luckie facilitated the Historian track.