In March, an alumnus of the Beta Omicron Chapter of Pi Kappa Phi Fraternity at Northwestern State University will be enshrined in the Mrs. H.D. Dear Sr. and Alice Estelle Dear School of Creative and Performing Arts Hall of Fame.

Dr. Jerry Payne, a chartering member of the fraternity in 1956, will be recognized for a lifetime of achievements and contributions to the arts at NSU, Natchitoches, the region, the state, nationally and internationally. On Friday, March 18, Payne will be honored with two others at the annual President’s Command Performance, a spring gala to celebrate the arts. Payne joins Jim Bob Key as the second Pi Kappa Phi alumnus named to the CAPA Hall of Fame.

A resident of Marshall, Texas, Payne earned bachelors and masters degrees in Music Education from NSU in 1957 and 1968, Specialist in Education in 1969 and Doctorate in Education in 1973. In a career spanning 45 years, he was a music educator for 20 years in Louisiana, including four years as Director of Bands at NSU, and 25 years in Texas. During that time, Payne led his bands in numerous outstanding competitive performances and was recognized with several professional honors.

Payne was born in Ruston, Louisiana on December 10, 1935 to Opal Hammock Payne and Maldon Payne. When he was three, his parents divorced and he and his mother went to live with her sister whom Jerry lovingly called, “Aunt Sister”. His aunt and uncle ran a boarding house, so Jerry became part of a large, diverse family which helped him to never feel like an only child. Throughout his childhood, he was loved, nurtured, and encouraged by many family members.

He started band on a $30 used metal clarinet in the 6th grade and later picked up the saxophone. His high school band experience left much to be desired. So much so, that Jerry became a cheerleader during his senior year to avoid playing in the band. The one positive, enjoyable musical experience that he had in high school was playing in a dance band run by a classmate, David Ward-Steinman, known as “David Ward and His Rhythm Ramblers.” Whatever little bit Jerry learned about music in high school was learned with the Rhythm Ramblers and not in the school band.

Payne playing his saxophone at Northwestern State in the 1950s.

This negative band experience motivated him to consider attending Northwestern State and major in instrumental and vocal music education. He felt strongly that students deserved and needed a much better band experience than he had received and was confident that he could do a better job than had been done for him.

Jerry entered Northwestern State on a band scholarship and later, during his last 2 years of college, became the student leader of the group known as the “Demonaires,” which consisted of a majority Pi Kappa Phi members. Because he had the responsibility of rehearsing, directing, and running the dance band, he gained valuable experience and knowledge toward becoming a band director. He actually had to teach his peers without them realizing that they were being taught! During his undergrad years, he played a critical role in helping charter the Beta Omicron Chapter of Pi Kappa Phi Fraternity, serving in numerous leadership roles, including a term as president in 1957.

Like many other young musicians at that time, Jerry hoped to be a professional player rather than a teacher, but that goal suddenly changed when he was student teaching. The “bug” bit him! He realized that he truly loved and enjoyed teaching and working with young people. About the same time, he was bitten by the “love bug”. He fell in love with an attractive, talented freshman girl named Marilyn Pippen. So, after Jerry graduated from NSU, they married and 3 days later, he began his teaching career as the band director at the brand new Alexandria Junior High School in his hometown.

As a student, Payne led the Demonaires, which was comprised of many of his fellow Pi Kappa Phi members.

After 10 years, at AJH, Jerry returned to Northwestern for graduate work, earning the Master of Music Education and Specialist in Education degrees. While in graduate school, he taught at two junior highs in Natchitoches and was a graduate assistant in the Music Department. He then returned home to open a new high school – Alexandria Senior High. The ASH band, as it was called, quickly became one of the best bands in the state. Jerry was there 3 years, culminating with the band being selected as the Louisiana Honor Band at the Four State Bandmaster Assn. Conference in 1972 and a 3-week trip to Europe, participating in and receiving First Division ratings in Concert and Marching at the First International Band Festival in Vienna, Austria. His band was one of three USA bands chosen by Dr. William Revelli to present a one hour live concert on Austrian National Radio.

After receiving the Doctor of Education degree in 1973, Jerry finished his final four years in Louisiana as Director of Bands at Northwestern State University, his alma mater. He then retired in Louisiana and moved to Marshall, Texas hoping to rebuild the struggling band program there. He and his loyal staff worked diligently for 25 years to restore the Marshall band program to a place of respectability. Under his leadership, the program developed into one of the finest in the state. The band program grew in size and quality and earned numerous UIL Sweepstakes awards. Fourteen years after his Alexandria Band was the Louisiana Honor Band at Four States, his Marshall Band was selected as the Texas Honor Band. The Marshall High School Band regularly performed with guest artists of national prominence, including Wayne Dyess, Norman Brentley, Donald Sinta, and Tommy Newsom.

Dr. Payne has served as a guest conductor and clinician for numerous honor bands in Arkansas, Louisiana, and Texas and has been a clinician and judge for festivals and contests in Texas, Louisiana, Mississippi, Oklahoma, Arkansas, and Tennessee. He is active in Phi Beta Mu, TBA, TMEA, TMAA, and is a Paul Harris Fellow in Rotary International. He is a semi-professional jazz and concert saxophonist, is active as an arranger of band and jazz ensemble music, and performs with the East Texas Baptist University Saxophone Quartet. In fact, he performed a solo saxophone concert at the Beta Omicron Chapter of Pi Kappa Phi’s 50th anniversary in 2006. 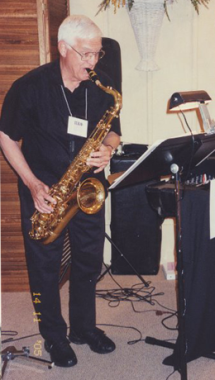 Payne was honored in 1987 by having his name placed on the “Wall of Distinction” at the Marshall Courthouse Museum under the category of “Composer-Conductor.” In 1990, he was the first inductee into the Band Directors’ Hall of Fame at his alma mater, Northwestern State University. Upon his retirement in June 2002, he was greatly honored by his students over the past 45 years, family, friends, and colleagues with a surprise retirement party including a 100+ member “Tribute Band,” comprised of former students from Louisiana and Texas spanning his career. The Tribute Band performed a special composition, “Reflections of an Era”, composed for the occasion. Dr. and Mrs. Payne were presented with an all-expense paid trip to Europe as a retirement gift from his former students.

In 2002, he was inducted into the Louisiana Music Educators Hall of Fame and the Texas Bandmasters Hall of Fame in 2004. Northwestern State honored Payne again in 2008, naming him to the institution’s Hall of Distinguished Educators. He remains active in the Beta Omicron Chapter of Pi Kappa Phi Fraternity’s ‘Founders’ Generation Alumni Group,’ attending reunions and luncheons when possible.

Dr. Payne and his late wife, Marilyn, have five children: two sons, Maldon and Ronnie, and three daughters, Donnis, Melissa, and Jeannie. They have 7 grandchildren. Payne resides in Marshall and attends Immanuel Baptist Church. He is a die-hard Texas Rangers fan, keeping Facebook friends informed of the team’s progress each season.

When speaking about his 45 year career, Dr. Payne says, “If I had it all to do over again, next time I think I would marry Marilyn Pippen and be a band director!”