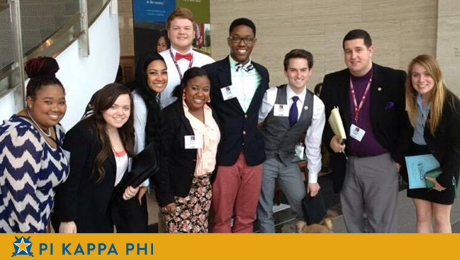 Shayne Creppel, an alumnus of the Beta Omicron Chapter of Pi Kappa Phi Fraternity, has been named director of Greek Life at Northwestern State University in Natchitoches, Louisiana.

Creppel advises 15 fraternity and sorority chapters, in addition to coordinating the activities of the NSU Interfraternity Council, College Panhellenic Council, National Pan-Hellenic Council, and Order of Omega. In this role, he also develops and implements educational programming on risk management, sexual assault prevention, anti-hazing, and alcohol safety, in addition to overseeing all recruitment and intake activities for the Office of Greek Life.

A key figure in the Department of Student Life, Creppel also advises the Student Government Association (SGA), aids in the successful execution of all student body elections, and serves as Budget Unit Head for the organization, the SGA Speaker Fee, Organizational Relief Fund, and Student Trust Fund. You’ll also find him in the classroom as an instructor of University Studies 1000.

Shayne Creppel is a 2008 initiate of the Beta Omicron Chapter of Pi Kappa Phi Fraternity.

Shayne has been able to live his dream of working at his alma mater, having earned a Master of Arts degree in Student Personnel Service in 2013 and a Bachelor or Science degree in Hospitality Management & Tourism in 2010. He is currently pursuing a doctorate in higher education administration. Creppel previously worked as NSU’s assistant director of Student Life and as an academic advisor & instructor for the NSU Academic & Career Engagement Center.

For Creppel, every day presents a new challenge and a new reward. “I get to work with the most involved students on campus. It is very fulfilling being able to see a student develop into a leader through membership in the Greek community. Advising these 15 very different groups as we all work toward a common goal is just about the best job I could ever imagine doing.”

As an undergraduate, Creppel served as NSU Student Body President for the 2007-2008 school year and held leadership positions in Pi Kappa Phi. As chaplain and historian, he was able to develop several programs that are still in use by the chapter. Creppel helped revive the annual Founders’ Day Banquet and established the Beta Omicron Chapter Archives in the university’s research center.

As a student and later as a staff member, Creppel has been called upon by NSU administrators to play a critical role in several notable projects. Since 2015, he has helped to guide the direction of the university as a member of both the Strategic Framework Team and the Strategic Budgeting Committee. He played an important part in the mascot makeover in 2013, serving on the Demon Mascot Committee, established to redesign Vic the Demon in honor of his 90th anniversary. As a member of the Demon Re-branding Committee in 2007-08, Creppel’s eye for design and creativity were instrumental in selecting the new logos used by the NSU Athletics Department. In his role as Student Body President, Creppel served as chair of the Student Technology Advisory Team (STAT), awarding more than $3 million in grants and initiatives. He has also served as an ex-officio member of the boards of directors for the NSU Alumni Association and NSU Foundation.

Since graduating, Shayne has continued to assist in the leadership development of Pi Kappa Phi members by serving as a past Ritual Advisor and New Member Education Advisor. He is also a past board member of the Beta Omicron Alumni Chapter and currently serves as a national volunteer with the Ladder of Risk program. In 2012, the Beta Omicron Chapter honored Creppel as the Distinguished Alumnus of the Year for his dedication.

“I was drawn to this profession because some of the very best people I know are Greek and have had a profound impact on me,” he said. “My experience in Pi Kappa Phi as a student and as a volunteer have given me a wonderful foundation by which to work.”