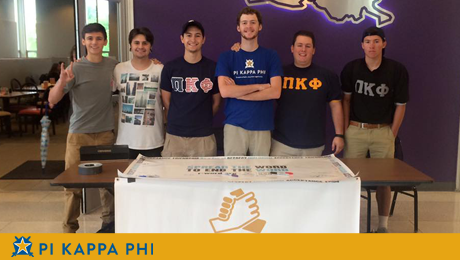 More than 200 students and faculty at Northwestern State University have pledged to eliminate a particular word from their vocabulary. Wednesday, April 20, 2016 is the last day they will use “retarded” in conversation.

The Beta Omicron Chapter of Pi Kappa Phi Fraternity sponsored ‘Spread The Word To End The Word,’ an awareness campaign, launched nationally in 2009 by Special Olympics. More than 500,000 people have pledged support online since the effort launched.

Members of the fraternity challenged their peers to sign a pledge in the Sylvan Friedman Student Union, then add their name to a banner which will be given to the Natchitoches ARC, which serves people with disabilities.

The project aims to inspire respect, acceptance, and inclusion through raising the consciousness of society about the R-word and how hurtful words and disrespect can be toward people with intellectual disabilities. Joseph Magnan, who organized the event, says language affects attitudes, which can impact an individual’s actions. “This isn’t about being politically correct. That word, even when it’s used casually, is offensive and very disrespectful toward people with disabilities.”

Students also used the event as an opportunity to raise awareness for The Ability Experience, Pi Kappa Phi’s nationally recognized nonprofit with numerous programs educating undergraduates, alumni and communities about the abilities of people with disabilities. Each year, members of the fraternity participate in service opportunities, awareness campaigns, and fundraisers in support of the philanthropy’s mission.

Senior Sean Austin pedaled on a stationary bike throughout the pledge drive. This Summer, the DeRidder, Louisiana native will cycle from coast to coast with the Journey of Hope, a trek that raises funds and awareness for people with disabilities.

To take the pledge online, visit www.r-word.org . To learn more about the Ability Experience, visit www.abilityexperience.org .