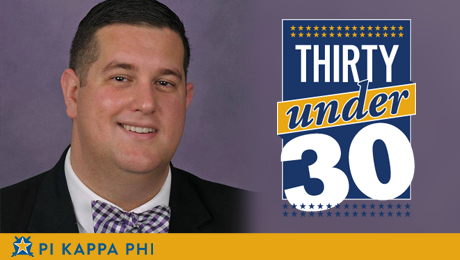 Shayne Creppel, an alumnus of the Beta Omicron chapter of Pi Kappa Phi at Northwestern State University has been named among the national fraternity’s most promising young alumni. Now in its third year, ‘Thirty Under 30’ recognizes young alumni for their achievement after their undergraduate careers have come to an end.

“I certainly have not had a long life yet but I have gone through my 29 years of it so far secure in the knowledge that if I were to make a list of the most meaningful and important people in my life that almost all of them would be members of the Greek community. To be recognized for my achievements as a Greek man and member of Pi Kappa Phi so far means a great deal to me. I am so very honored.”

As director of Greek Life at Northwestern State University, Creppel advises 15 fraternity and sorority chapters, in addition to coordinating the activities of the NSU Interfraternity Council, College Panhellenic Council, National Pan-Hellenic Council, and Order of Omega. In this role, he also develops and implements educational programming on risk management, sexual assault prevention, anti-hazing, and alcohol safety, in addition to overseeing all recruitment and intake activities for the Office of Greek Life.

A key figure in the Department of Student Life, Creppel also advises the Student Government Association (SGA), aids in the successful execution of all student body elections, and serves as Budget Unit Head for the organization, the SGA Speaker Fee, Organizational Relief Fund, and Student Trust Fund.

Shayne earned a Master of Arts degree in Student Personnel Service from NSU in 2013 and a Bachelor or Science degree in Hospitality Management & Tourism in 2010. He is currently pursuing a doctorate in higher education administration. Creppel previously worked as NSU’s assistant director of Student Life and as an academic advisor & instructor for the NSU Academic & Career Engagement Center.

As a student and later as a staff member, Creppel has been called upon by NSU administrators to play a critical role in several notable projects. Since 2015, he has helped to guide the direction of the university as a member of both the Strategic Framework Team and the Strategic Budgeting Committee. He played an important part in the mascot makeover in 2013, serving on the Demon Mascot Committee, established to redesign Vic the Demon in honor of his 90th anniversary.

As an alumnus, Shayne has assisted in the leadership development of Pi Kappa Phi members by serving as a past Ritual Advisor and New Member Education Advisor. He is also a past board member of the Beta Omicron Alumni Chapter and currently serves as a national volunteer with the Ladder of Risk program. In 2012, the Beta Omicron Chapter honored Creppel as the Distinguished Alumnus of the Year for his dedication.

“I could not imagine where or who I would be without my experience in Pi Kappa Phi. I have been shaped tremendously by the values of this organization and by the men I am honored to share this Ritual with.”

Creppel was nominated to be included in the 2016 ‘Thirty Under 30’ class by their peers, older alumni, and friends of the fraternity. From there, a committee of volunteers reviewed all of the nominees in areas such as impact, leadership and service, and awards and recognition. After the herculean effort of reviewing all nominations was completed, the list was narrowed to the 30 finalists.

“The brothers of the Beta Omicron Chapter have been some of the most incredible individuals I have ever had the honor know in this life. I have also had some amazing alumni to look up to like David Morgan, Robert Crew, Shawn Daily, and Joe Sampite just to name a few. However, the men I was able to share the experience of being in the chapter at the same time with have had the most profound impact.”

Alumni of 27 different chapters of all sizes, locations and age are represented in the group of 30, painting a broad, yet distinguished, view of Pi Kappa Phi as a national organization. The recipients come from all types of backgrounds, and were nominated for all types of outstanding achievement: volunteerism, professional achievement, etc. While the qualifications of the honor can vary, all of the recipients have in common a commitment to fraternal values. These men are all outstanding examples of how to live out the values of Pi Kappa Phi long after leaving their college campus.