The cycling trek lasts only two weeks, but the lives touched along the 845-miles of Gear Up Florida’s route won’t soon forget Pi Kappa Phi members like David Johnson and Michael Dailey. The Northwestern State University students were among the 39 cyclists and crew members riding across the State of Florida to re-shape the perception of people with disabilities.

On Sunday May 14, 2017, the 20th annual cycling event kicked off on the shores of Miami, traveled through the Florida orange fields, reached the Gulf coast, passed through Orlando, wound back to the Atlantic coast and culminated at the State Capitol in Tallahassee. The team spread a message of acceptance and understanding to communities in Florida through newspapers, radio and television, civic groups and community leaders, reaching millions of people.

Cyclists pedaled an average 80 miles each day, before participating in a ‘friendship visit’ with an organization that serves people with disabilities in each community. The Ability Experience, Pi Kappa Phi Fraternity’s philanthropy, provides each of these non-profits with a grant before departing the next day. 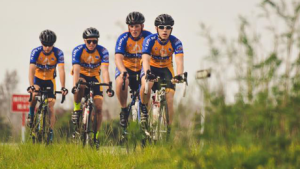 The trek provides a heavy dose of life perspective that leaves participants inspired and motivated to do more for people with disabilities.

“This experience has changed my life one mile at a time,” Dailey said. “I will always remember the lessons it taught me, the memories I’ve made, and the friendships I’ll keep.”

Having previously served as a crew member the 2016 Journey of Hope, a cross-country version of the trek, Dailey returned as a cyclist for this year’s Gear Up Florida team. A rising senior, the Music Business major from West Monroe, Louisiana, contributed $2,545 in fundraising. Johnson, a rising senior and Elementary Education major from Denham Springs, Louisiana, raised $2,501 as a cyclist for the trek.

Team members are selected through a rigorous application process, which included a one-thousand word essay and phone interview. Collectively, this year’s team raised $97,129, which will directly benefit people with disabilities through the many programs and grants offered by the Ability Experience.

Gear Up Florida’s programming is what makes this event so unique, with every event centered on the mission of the trek. Some days, team members will visit three different organizations that support people with disabilities.

Seeing the direct impact on the people they raise money for is very emotional for team members. Many cannot help but be touched by the gratitude and kindness that is shown along Gear Up Florida.

The trek provides a heavy dose of life perspective that leaves participants inspired and motivated to do more for people with disabilities in their own communities.

“I have met so many awesome and fun people,” Johnson said. “My life is changing every day and I am learning so much about myself.”

Since Gear Up Florida’s creation in 1997, more than 375 Pi Kappa Phi members have participated, including 14 students from NSU.

[Portions of this article from http://www.abilityexperience.org]