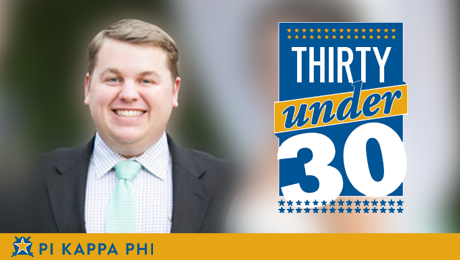 Nick Breaux, an alumnus of the Beta Omicron chapter of Pi Kappa Phi at Northwestern State University has been named among the national fraternity’s most promising young alumni. Now in its fourth year, ‘Thirty Under 30’ recognizes young alumni for their achievement after their undergraduate careers have come to an end.

Breaux, whose career has taken him across the country, working in the non-profit sector, was nominated to be included in the 2017 ‘Thirty Under 30’ class by their peers, older alumni, and friends of the fraternity. From there, a committee of volunteers reviewed all of the nominees in areas such as impact, leadership and service, and awards and recognition. After the herculean effort of reviewing all nominations was completed, the list was narrowed to the 30 finalists.

A native of Morgan City, Louisiana, Breaux attended Northwestern State University, where he became involved in the Aviation department’s flight team, club soccer team, and excelled as an officer in Pi Kappa Phi.  In 2008, he completed Gear Up Florida and returned to the chapter with a renewed passion for serving others. After a term as Ability Experience chairman, he later helped incorporate service into Beta Omicron’s recruitment program as the chapter’s Vice Archon.

In May 2010, only days after graduation, Nick completed a “super summer” by serving as crew chief on both Gear Up Florida and the Journey of Hope South team. Breaux says it remains the best summer of his life. “Each day our work was rewarded as we visited a new town and new people. Everyone should understand that a person with a disability is a person with their own set of abilities. That summer I met comedians, home run sluggers, business leaders, and champions. Although they live with certain disabilities, each has amazing abilities.”

Breaux’s first job was as a program consultant for the Ability Experience, logging nearly 10,000 miles between visits to more than 40 college campuses around the country. He excelled in assisting Pi Kappa Phi chapters develop and improve programming and service learning opportunities. Breaux used the same values and ideas that were instilled in him as a student at NSU. “Beta Omicron chapter helped me develop leadership skills that have positioned me to serve others as a consultant.”

Breaux’s success in working with student leaders earned him a promotion as Director of Chapter Services with the Ability Experience, serving as a direct resource for Pi Kappa Phi chapters seeking to grow their fundraising, volunteer and philanthropic efforts on their campus. During this time, he also played an important role in helping with the non-profit’s strategic re-branding effort, transitioning from Push America to The Ability Experience.

In 2015, he left the organization to pursue a Master’s of Arts degree in Christian Leadership, Organizational Leadership at the renowned Gordon Conwell Theological Seminary in Charlotte, North Carolina.

His experiences in higher education and working with student leaders made him an asset to his church, Warehouse 242, when he stepped into the interim role of Director of Student ministries for seven months. There, he developed programming in conjunction with the church vision and strategic plan, coordinated volunteers, and planned and executed special events and outings for the youth of the congregation.

In May 2016, Breaux returned to his roots in serving people with disabilities, accepting a role with Holy Angels in Belmont, North Carolina. The non-profit provides specialized, round-the-clock care for children and adults with intellectual developmental disabilities and delicate medical conditions. As campus manager, he helps maintain an environment that fosters loving and compassionate care, opportunities for dignified living and innovative learning programs, and empowers those who are differently able. Breaux oversees seven homes, with 85 residents receiving services.

Pi Kappa Phi, Breaux says, has helped him find success in life. “In Pi Kappa Phi, my experiences have taught me to be diligent, creative, inclusive, adaptable and to know my limits.  My best should happen every day, even when I’m tired and don’t want to. Solutions come in many different shapes and sizes and my experience has shown me how to see the big picture in order to allow projects to become something we never dreamed of. Without change, nothing will ever improve and those who do not adapt well will be left behind — even if that change means stepping out of the way of others.”

Breaux has remained a dedicated volunteer for both his chapter and the greater fraternity. He currently serves on the Beta Omicron Chapter’s Council of Advisors (COA) as Ability Experience Advisor, offering support and guidance for the undergraduate chapter’s philanthropy efforts. He is also member of the Beta Omicron Alumni Chapter. As a volunteer for the national fraternity, Nick visits chapters in his region, facilitating the Ladder of Risk and has also been involved in Pi Kapp College for Chapter Officers.

Breaux says he uses many of the servant leadership values instilled by the fraternity on a daily basis. “I learned those values through my experience in the fraternity, most distinctly my experience with The Ability Experience, both as an undergraduate and a staff member. I apply the servant leadership lessons to leading and working hand-in-hand with others to bring out the abilities of all people no matter what disability they may have. Every day at work, I get to look at Individuals that are viewed by most of society for their disabilities only. I get to lead a team that asks the question, ‘what are their abilities?'”

Nick and his wife Katie reside in uptown Charlotte and enjoy sampling craft brews, running (he finished the 2012 Marine Corps Marathon), doing yoga, and cheering on their favorite sports teams.

Alumni of 24 different chapters of all sizes, locations and age are represented in the group of 30, painting a broad, yet distinguished, view of Pi Kappa Phi as a national organization. The recipients come from all types of backgrounds, and were nominated for all types of outstanding achievement: volunteerism, professional achievement, etc. While the qualifications of the honor can vary, all of the recipients have in common a commitment to fraternal values. These men are all outstanding examples of how to live out the values of Pi Kappa Phi long after leaving their college campus.