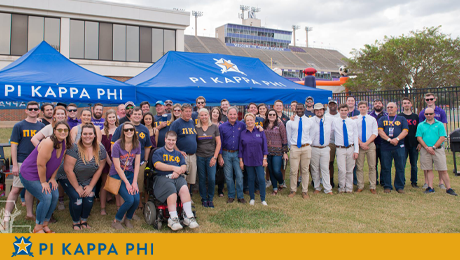 About a hundred Beta Omicron Chapter alumni and students celebrated recent achievements and reconnected during reunions, tailgating and other gatherings.

Later, Beta Omicron Chapter members packed their ‘Back to the 80s’-themed float to ride in the NSU Homecoming Parade down University Parkway in Natchitoches. A pep rally included performances by the NSU cheerleaders, Demon Dazzlers, pom pon line, and the Spirit of Northwestern Demon Marching Band; the introduction of the Homecoming Court, including Pi Kappa Phi members Dedrick Lewis and Noah Baudoin, as well as an appearance by NSU Head Football Coach Jay Thomas, senior football players and the NSU mascot, Vic the Demon.

That night, alumni and spouses gathered at downtown restaurants for reunions organized by decade of graduation.

Members of Pi Kappa Phi Fraternity and Sigma Sigma Sigma Sorority gathered at the Alpha Zeta Chapter House for the announcement of the Morgan First Generation Scholarship. Beta Omicron Chapter alumnus David D. Morgan, Senior and wife Sherry made the largest individual one-time gift to the NSU Foundation in its history — $600,000, to establish this scholarship for members of the fraternity and sorority. It will be awarded to the first group of recipients in 2018.

The fun and fellowship continued at the Demon Commons, where families and generations of alumni convened at the Pi Kapp tailgating tents.

Dozens of Pi Kapps, their families, and friends enjoyed corn hole and flag football before heading to Turpin Stadium to watch the Demons take on the University of Central Arkansas. Pi Kappa Phi students and alumni were recognized during the game. Lewis and Baudoin were announced as members of the NSU Homecoming Honor Court. Alumnus Lane Luckie was named NSU ‘Outstanding Young Alumnus’ of the Year.