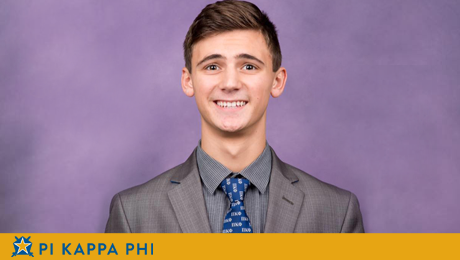 Derived from the Latin phrase meaning, “To the Stars,” the Ad Astra Society recognizes the Fraternity’s top student leaders for their achievement and impact within Pi Kappa Phi, on their campus, and in their community.

“Throughout May and June, we challenged students, alumni, and friends of the fraternity across the country to nominate student members and recent graduates who exemplify Pi Kappa Phi’s commitment to leadership,” a news release stated. “The Fraternity received over 300 nominations and applications, and we are excited to recognize 124 members — one percent of our student membership — for their achievements.”

Pi Kappa Phi strives to create an uncommon and lifelong brotherhood that develops leaders and encourages service to others for the betterment of our communities.

No more than one percent of Pi Kappa Phi’s undergraduate students may be inducted into the Ad Astra Society each year.

A junior biology/applied microbiology major, Baudoin is a research scholarship recipient for the NASA-JOVE (Joint Venture) program through the Northwestern State University College of Science and Technology. This Spring, he represented NSU and presented research at the 92nd annual meeting of the Louisiana Academy of Sciences. He has maintained a 3.5 GPA or higher and plans to be a physicians assistant.

At NSU, Baudoin serves as General Manager of KNWD, the university’s student-run FM radio station, having previously served as director of technology. He has also been involved with the Student Activities Board, serves as treasurer of American Society of Microbiology and secretary of Beta Beta Beta biological honor society, and has been on the NSU Demon Crew rowing team. In 2016, Baudoin was named NSU’s ‘Emerging Greek Leader.’ His peers elected him to the 2017 NSU Homecoming Honor Court. He was the recipient of the Beta Omicron Chapter’s ‘NSU Freshman Leadership Scholarship’ in 2015, in recognition of his accomplishments and involvement in high school.

“Pi Kappa Phi turned me into the best version of myself that I could be,” Baudoin said. “From Pi Kappa Phi, I have learned to address performance issues while not magnifying weaknesses; this was prevalent when I hired a 15 person staff for the student radio station and it was my job to put people where they work best. As two-time secretary, I am motivated to contact brothers so the whole chapter is on the same page. I show the same motivation to communicate when I have to plan logistics of the annual on-campus music festival. As much as my leadership impacts the community, Pi Kappa Phi has impacted me that much more.”

Beta Omicron Alumni Chapter president Lane Luckie said Baudoin is a well-rounded individual. “Noah is a walking example of each of Pi Kappa Phi’s public values. He seizes the opportunity to grow and learn through any situation or setting. Noah also exhibits a genuine desire to help others achieve their goals, opening doors for his peers and challenging those around him in a constructive manner. Take a magnifying glass to Noah’s daily life and you’ll find a model Pi Kapp, someone who represents the best of this generation.”