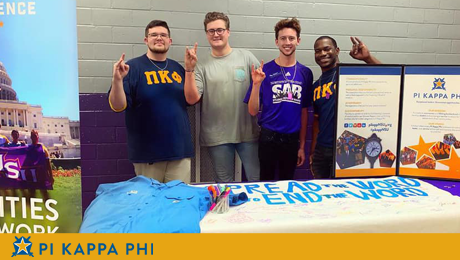 More than a hundred members of the Northwestern State University community are joining Pi Kappa Phi Fraternity in a conversation about respect.

On Wednesday, February 27, members of the Beta Omicron Chapter held their annual ‘Spread the Word to End the Word’ campaign to promote the inclusion and acceptance of people with intellectual and developmental disabilities.

“Words like the “R-word,” otherwise known as “retard,” have found a place in common language and the feeling of isolation has become a norm for those with intellectual disabilities,” according to The Special Olympics, which sponsors the national Spread The Word project. “While both of these actions have become common, it is hurtful to millions of people with intellectual and developmental disabilities, their families, and their friends.”

The NSU Pi Kapps organized the local event as part of their outreach through The Ability Experience, the fraternity’s philanthropy that serves people with disabilities. Manning a table in Prather Coliseum, they engaged fellow students in a conversation about respect and acceptance by advocating for inclusive words and actions.

“Respectful and inclusive words and actions are essential to the movement for the dignity and humanity of people with intellectual disabilities,” a news release stated.

Member Tyler Vienne helped organize this year’s event. He says his inspiration came from participating in Build America, a six-week event to construct accessible amenities at six different summer camps. During that time, he formed friendships with the individuals who would utilize the additions.

“The ‘R-word’ is not just a word. It goes deeper than most think. Understanding how this can affect people with disabilities and their families can help us to end discrimination.”

To learn more about Spread the Word, click here.

For more information on The Ability Experience, click here.