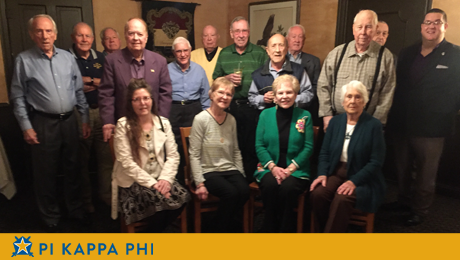 Sixty-three years after founding the Beta Omicron Chapter of Pi Kappa Phi Fraternity at Northwestern State University, the bonds of friendship have never been stronger for the chartering members.

A group of more than 15 alumni, wives, and guests, including Jack McCain, the Beta Omicron Chapter’s founding archon, and past rose queens Sylvia George and Barbara Cameron were in attendance.

The meeting began with a heartfelt prayer delivered by alumnus Charlie Bice, followed by a lunch of various Cajun and seafood dishes.

Chuck Fulco was recognized with a ‘Diamond Legion’ certificate in honor of 60 years of membership. The National Headquarters also prepared new membership cards and shingles, which were presented to the group.. 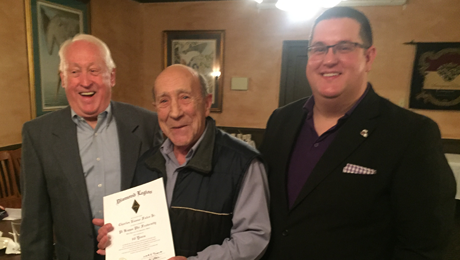 Shayne Creppel, NSU’s Director of Greek Life who also serves as Beta Omicron Alumni Chapter’s secretary, delivered an update on the student chapter, as well as a report on the National Fraternity and the current landscape of Greek Life around the country, including new hazing laws designed to eliminate this from the fraternal experience.

All alumni celebrating their 80th birthday in 2019 were inducted into the group’s ‘Club 80’ as slices of cake were served and door prizes were drawn.