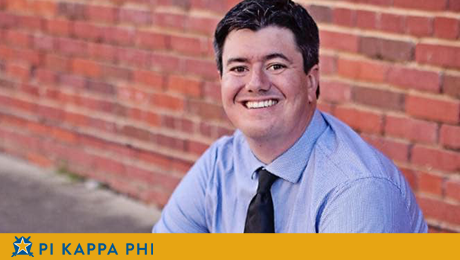 Dr. Christopher Lyles has been named interim director of the Northwestern State University School of Biological and Physical Sciences for the 2019-20 academic year.

Lyles, an alumnus of Pi Kappa Phi Fraternity, has been a member of NSU’s School of Biological and Physical Sciences faculty since 2015. He earned a Bachelor of Science degree in biology at NSU in 2004, a master’s degree in marine and environmental biology at Nicholls State University in 2006 and a doctorate in microbiology from the University of Oklahoma in 2013.

Lyles has been an active researcher, research mentor to undergraduate students and presenter. Since joining the faculty at NSU he has served on several academic committees and been involved with alumni outreach, grant-writing and service-learning projects.

Lyles has been active in the Beta Omicron Alumni Chapter for many years and has served as a chapter advisor for the Pi Kappa Phi student chapter at NSU since 2016.

The announcement was made Friday alongside the Dr. Francene J. Lemoine being named interim dean of the College of Arts and Sciences pending approval from the Board of Supervisors of the University of Louisiana System and Scott Burrell appointed interim director of the Mrs. H.D. Dear Sr. and Alice E. Dear School of Creative and Performing Arts.

“I am thrilled to have these three individuals join the academic leadership ranks in the College of Arts and Sciences,” said Dr. Greg Handel, provost and vice president for Academic Affairs. “They bring tremendous experience and perspective to their respective roles and will continue to develop programs that are responsive to today’s students. Their experiences in their respective fields is invaluable for continued growth in these stellar programs.”