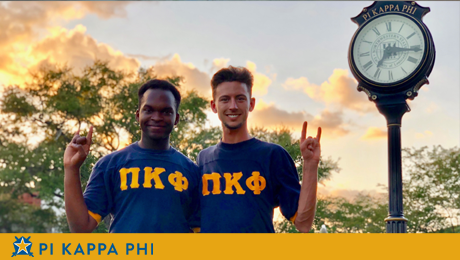 Char’Tarian Wilson and Colton Campbell, both members of the Beta Omicron Chapter, were announced this week as inductees to the 2019 class.

Derived from the Latin phrase meaning, “To the Stars,” the Ad Astra Society recognizes the Fraternity’s top student leaders for their achievement and impact within Pi Kappa Phi, on their campus, and in their community.

“Throughout June and July, we challenged students, alumni, and friends of the fraternity across the country to nominate student members and recent graduates who exemplify Pi Kappa Phi’s commitment to leadership,” a news release stated. “The Fraternity received over 500 nominations and applications, and we are excited to recognize 114 members — one percent of our student membership — for their achievements.”

No more than one percent of Pi Kappa Phi’s undergraduate students may be inducted into the Ad Astra Society each year.

Pi Kappa Phi strives to create an uncommon and lifelong brotherhood that develops leaders and encourages service to others for the betterment of our communities.

Wilson, a senior biology major, plans to obtain a Masters in Physician’s Assistant and enter the medical field.

He was elected to the NSU Homecoming honor court and was 2018 NSU Homecoming King. In 2018, he was inducted into the NSU chapter of Order of Omega and in 2019 was selected for Phi Kappa Phi Honor Society.

Wilson says this honor inspires him to push to achieve his goals in his remaining time at NSU.

“Pi Kappa Phi to me means to push yourself to be better than the man you were yesterday all while serving the world around you. It’s definitely not easy but it makes for a true and meaningful experience that i wouldn’t trade for the world.“

A rising senior, Campbell is a well-rounded student leader both in and out of his chapter.

He is a double major in Accounting and Business Administration with a 3.5 cumulative GPA.

Colton currently serves in the following roles: senator for the Student Government Association; Summer Event Manager for Student Activities Board/University’s Programming Council, where he manages and oversees satellite events on the NSU CenLA and Leesville campuses, guides and administers activities for incoming freshman and offering information regarding campus life and campus events at Freshman Connection orientations, and overseeing lagniappe student events throughout the year; Historian for Pi Kappa Phi Fraternity, where he oversees alumni relations, social media, events such as Rose Ball and Homecoming, as well as documenting history of the chapter.

Colton’s day-to-day life is clearly models each of Pi Kappa Phi’s public values. He demonstrates a strong desire to help others achieve their goals, opening doors for his peers and challenging those around him in a constructive manner. All with a cheerful attitude, he finds time to balance his work, school, and social life in a way that brings credit to the fraternity.

On top of his academic commitments, he also volunteers for the Louisiana Sports Hall of Fame and Northwest Louisiana History Museum, NSU’s Food Pantry, and his church, Family Worship Center.

Campbell says he hopes his academic career will have a lasting impact at NSU.

“Pi Kappa Phi has molded me into a man with confidence, integrity, and respect. Through Pi Kappa Phi, I matured as a student and man to accomplish many of my ambitions of having an impact on my campus. Through the encouragement of my brothers and alumni, I have had enough strength to get to my senior year.”