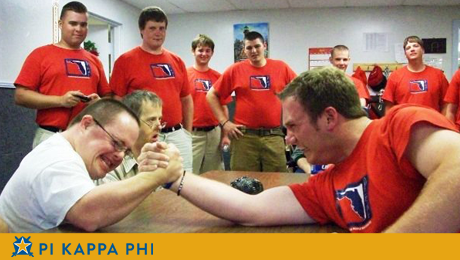 The following is an excerpt from the daily journal kept by the Pi Kappa Phi brothers riding in Push America’s Gear Up Florida.

The trek is a 2 week ride across the state of Florida, which provides opportunities to promote the message of Push America. Throughout the route, friendship visits and service projects will be completed to serve those with disabilities.

Day two started with an early wake up, making sure the team was up and ready to go by 7am. It was the team’s first practice pack, which is where everything is packed and brought to the vans, as if a trip was to be made to the next city.

Practice pack is to be sure everyone knows what to expect on the mornings where no time is to be wasted before getting on the road to the next town.After the practice pack, all bags were returned to the rooms and bicycles were retrieved for an intense morning full of skills assessment. The team practiced changing flat tires, riding in pace lines and even worked on being able to pick up a water bottle off of the ground while riding the bicycle, which proved more difficult than some had imagined. However the difficulty did not hinder the team succeeding at the skill. Once completing the skills assessment the team met up for a session on cycling rules of the road, and a short debrief on the skills assessment.

After morning training, it was time for the team’s first friendship visit. The team piled in the vans and departed for the friendship visit at Possible Dreams. As soon as the team arrived, we were greeted with huge smiles and eagerness ready to hangout. The team met with the kids and jumped right in to playing basketball. Everyone taking turns shooting hoops. I have never seen such talent in so many young kids before. As much fun as basketball was, it did not take long for the kids to want to play “duck duck goose.” The team was very eager to play as most have not played for years. While many were playing “duck duck goose” some found joy in playing on the playground, going down the slide or on the swing. Everyone was really enjoying the time together. Visiting with the kids at Possible Dreams was an amazing experience and cannot wait for more friendship visits to come. After a couple hours of playing with the kids, it was unfortunately time for the team to depart and head back to campus.

After the friendship visit the team had a few hours to shower and get ready for dinner which was put on by the Theta Delta Chapter of Pi Kappa Phi. Theta Delta put on an Empathy dinner for our kick-off dinner. With attendance by many of the Greeks from campus, it was a great time. Many were stumped as to why marbles had been placed in-front of them, only to find out that they were to experience a disability during dinner. Some where blindfolded to experience blindness, others had hands tied behind their backs, certain fingers taped together, others were mute or deaf. Not everyone was given a disability; however most that was not given a disability had to help those with disabilities, allowing them to understand disabilities as well. After making it through dinner, we had a guest speaker. His name was David Pedemont-Forte. He was diagnosed with autism at the age of six and had overcome many of the obstacles that doctors had said he would not overcome. It is a really motivating story.