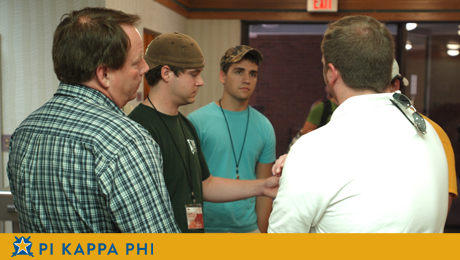 This designation is given to chapters that fund raise a minimum average of $50 per man, maintain a volunteer relationship with a community organization that serves people with disabilities, and participates in at least one national Push America program.

More than 500 other undergraduate brothers, alumni and friends of Pi Kappa Phi commemorated the 50th anniversary of Pi Kapp College, the premiere leadership school of Pi Kappa Phi. Held at the College of Charleston archons, chaplains and standards board chairmen of each chapter explored the Fraternity’s values, founding principles, and standards designed to help prepare them to lead their chapters in creating a culture of accountability to the ideals of Pi Kappa Phi.

Students participated in topical tracks, augmented by general session speakers and excursions to the important Pi Kappa Phi sites around Charleston. Past National President Phil Summers, Alpha Psi (Indiana), was the opening keynote for the conference. Having attended the first Pi Kapp College in 1959 and returning to keynote the 25th anniversary in 1974, Dr. Summers was able to relate to students what the past 50 years held and how in many ways the needs of fraternity remained the same.

On Friday former staff member and author of the White Diamond, T.J. Sullivan, Alpha Psi (Indiana), spent time with the brothers talking about “confronting the idiot in your chapter.” In his program T.J. challenged the men to step to the plate and find the courage to confront negative actions and attitudes from their fellow members. He offered practical strategies for increasing the effectiveness of constructive confrontations.