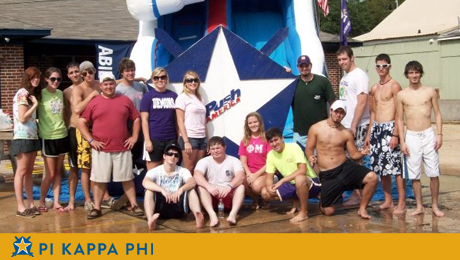 As many Greek organizations struggle to establish an identity in a changing campus environment, Pi Kappa Phi’s long-established commitment to leadership and service has the fraternity positioned for expansion in the coming semester.

Seeking men who share these qualities will be the core of the chapter’s membership recruitment efforts this fall. Long-known for their devotion to serving people with disabilities through Push America, the Beta Omicron chapter began the semester with an awareness campaign.

A scaffold sit and stationary cycling marathon highlighted the effort. Chapter members sold barbecue chicken plates and tickets for a ride down a giant waterslide to raise funds for Push America.  As residents and students stop by the chapter house to pick up dinners, they were invited to learn more about disabilities through the scaffold sit and cycling marathon.

The NSU chapter of Pi Kappa Phi hopes to raise $3,000 for Push America in the next year.