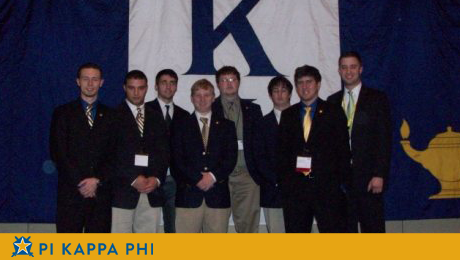 “Simple Choices. Major Impacts.” was the theme of the conference, inspiring members to take action at their university. The simple decision to lead can have far-reaching implications for a member.

More than 500 Pi Kappa Phis received hands-on training in each of their leadership roles. They were able to exchange ideas with other chapters as well as receive direction from the national fraternity office.

Beta Omicron Chapter was recognized for their efforts in recruitment, service to Push America, and a newly-developed scholarship program. Fraternity CEO Mark Timmes (Florida) presented a State of the Fraternity address. He explained how Pi Kappa Phi is excelling in all areas, as other fraternities are experiencing a time of turmoil during this recession.
Timmes reiterated the Fraternity’s Second Century Vision, the goal of the organization to grow, both by the number of chapters and size of chapters. Pi Kappa Phi currently has 154 student chapters and nearly 8,000 undergraduate members. An aggressive chapter expansion plan for 2010 was also outlined. Planned expansions include colonizing at NSU rival Stephen F. Austin State University in nearby Nacogdoches, Texas.

In the spirit of Push America, keynote speaker Jason Reiger motivated students with his presentation “Getting back in the game (and smashing stereotypes along the way).” Reiger was paralyzed from the neck down in a 1996 car accident. After years of rehabilitation, he went on to win a gold medal at the 2008 Beijing Paralympic Games as a member of the quad rugby team.