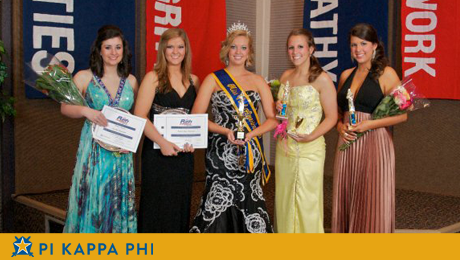 Junior family and consumer science major Ashley Williams has been named the 2010 Miss Push America. On April 29th, Williams and 13 other contestants competed for the title. The pageant, an outreach project of the Beta Omicron Chapter of Pi Kappa Phi Fraternity, aims to raise awareness on behalf of people with disabilities.

Prior to the competition, contestants were encouraged to raise funds and participate in service projects for Push America. Since 1977, Push America has raised millions of dollars for and positively impacted the lives of thousands of people with disabilities.

The overall winner was selected based on scoring from interviews, fitness/sports wear, evening wear, and an on-stage question. A separate, non-scored talent portion gave contestants an opportunity to showcase their selected performance. 4th runner-up was Victoria Cararas, 3rd runner-up was Kara Ford, 2nd runner-up was Jessi Nuss, and 1st runner-up was Whitney Wilson.

Miss 2010 NSU Push America Ashley Williams will serve as an ambassador for Push America during the 2010-2011 academic year. A member of Tri Sigma Sorority, Williams aspires to one day be a Radio City Rockette. She won the fitness, interview, and evening gown competitions. Williams, in her spare time enjoys dancing, jewelry-making, and community service.