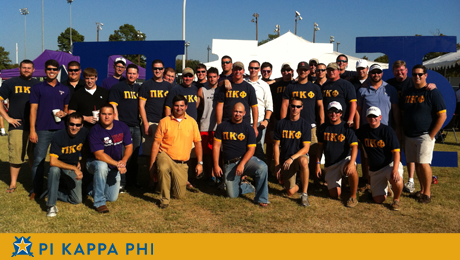 55 years of history came together in grand fashion to commemorate the many accomplishments of the Beta Omicron chapter at the 2011 Homecoming Reunion.

A weekend of gatherings reunited brothers, spouses, and guests from around the country returning to their alma mater. On October 14 the annual homecoming parade, featuring a float from Pi Kappa Phi, rolled through historic downtown Natchitoches. Students lined the hill along Front Street for a pep rally on the banks of the Cane River. Once the echos of the NSU Fight Song had faded, a social at Antoon’s Riverfront Restaurant gave the opportunity for several generations of Pi Kappa Phi to connect. Alumni, active, and associate members traded Pi Kapp stories about their experiences in the Fraternity. The turnout for the evening was one of the best in recent years.

Saturday morning began bright and early with an alumni breakfast at the chapter house across from the Northwestern State University campus. Meantime, two members of Pi Kappa Phi had already begun a 25-mile trek from the plantations south of Natchitoches to the Pi Kapp clock at the NSU Alumni Plaza. The annual ride honors the memory of Sharon Sampite, daughter of Beta Omicron alumnus Joe Sampite. Sharon lost her battle with cancer in 2009. The ride serves the kickoff for a week of fundraising by members of Pi Kappa Phi Fraternity and Sigma Sigma Sigma Sorority, who will contribute to a scholarship fund in her memory.

Following the presentation, scholarships were presented to Beta Omicron student members who go the “extra mile.” Chase Harvey, Kevin Bruce, and Cody Cloud were awarded more than $2,000 for their efforts in the classroom, service to Pi Kappa Phi, and participation in the NSU student community. The Morgan “Extra Mile” Scholarship Program seeks to recognize academic performance while encouraging active and sustained involvement in NSU, all while remaining active in the affairs and operation of the chapter. The chapter also received an award from the National Fraternity, designating Beta Omicron as the chapter with the most-improved grade point average.

The fun and fellowship continued at the Demon Commons, where excitement for the game was stirring at the Pi Kapp tailgating tent. The smell of Jambalaya filled the air, while people waited in line for their turn at a game of washers or cornhole. The chapter debuted two new sets of custom equipment for the games. More than a hundred Pi Kapps, their families, and friends enjoyed all of the entertainment and music at the tent before watching the Spirit of Northwestern’s pre-game performance. The energy in Turpin Stadium certainly helped carry the Demons to a 51-17 victory over Southeastern.