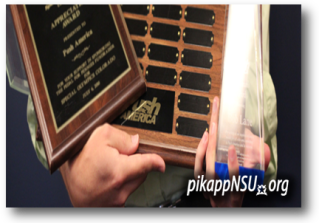 In the academic year 2011-2012, Beta Omicron contributed more than $2,000 of the $356,000 raised by chapters of Pi Kappa Phi across the country. Those funds will support the many projects of Push America in building the leaders of tomorrow by serving people with disabilities today. Beta Omicron was named to the “Centennial Society,” honoring chapters that achieve at least $100 in fundraising per member. The chapter at Northwestern State also received the Gold Star Award for academic year 2011-2012, signifying a top-performing chapter in the area of commitment service.

Annual projects include the Miss Push America NSU pageant, extending the opportunity to involve the campus community in engaging in a discussion about disability awareness. Members also host a scaffold sit and bike-a-thon to raise funds and awareness. A large portion of the funds raised stay in the Natchitoches community, through Push America’s Circle of Giving grants. The chapter is able to donate a percentage of their fundraising to the Natchitoches A.R.C.

In March 2012, members and alumni participated in a weekend of service through a Give A Push Weekend at the Louisiana Lions Camp near Anacoco. As a crew member for Gear Up Florida, past Archon Ryan Jeffords led a team of 35 cyclists across Florida to re-shape the perception of people with disabilities. This 800-mile cycling event spread a message of acceptance and understanding to communities in Florida through newspapers, radio and television, civic groups and community leaders, reaching millions of people.