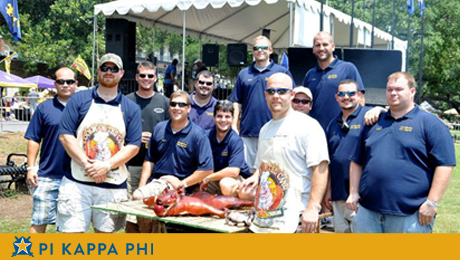 Pi Kappa Phi Fraternity alumnus Alan Pasch is hoping to encourage and cultivate young leaders as the newly elected president of the Natchitoches Jaycees. Pasch was named to the post earlier in 2013, after previously serving on the service organization’s board of directors as executive vice president and chair of the toy drive.

Pasch is taking over at a time of great momentum for the group. Last year the Natchitoches Jaycees raised more than $80,000 to benefit various community projects, which include: handing out carnations were handed out at area nursing homes on Valentine’s Day, the barbecue Festival, a golf tournament, Skeet Shoot Competition, hosting the Natchitoches Area Ducks Unlimited Banquet, the M.A.S.H. Christmas Toy Drive, working as Santa Claus during the Natchitoches Festival of Lights, and twice a year $4,000 is given to random charities. Pasch says his members are very motivated and the experience is rewarding. “The awesome thing about our events is that we really have a great time doing them,” Pasch said. “We build a strong brotherhood and camaraderie while helping out great causes.”

The annual toy drive is what initially drew him to the organization in 2009. “This past year we collected about $26,000 in toys and money and were able to distribute toys to approximately 325 Natchitoches-area families. It really makes me happy to help so many children.”

As president, Pasch will direct the organization’s officers and event chairmen, run meetings, and act as a liaison to the community. “I am a strong believer in leading by example, so my goal is to make sure the [members] see me actively attending all meetings and functions, making them want to do more.”

Pasch said he is hoping to expand on the excitement and interest in the organization. As recently as 2006, the Jaycee’s membership was as low as 6 men, but sits at 41-strong. “My goal is to teach the new, younger guys how to step up and become the leaders for the future.” Not only is being a great leader a focus, but Pasch wants to bridge the gap between multiple generations of members.

The Natchitoches chapter has been active since 1956. In that time, the group has contributed thousands of man hours to bettering the community. The organization is continuing that tradition today with a charismatic group of young professionals from many backgrounds. According to its website, the Jaycees also provides “opportunities to network, make new friends, learn the art of delegation, improve upon planning and public speaking skills, make a difference in the lives of others, and make a difference in your life and in the life of our local community.”

Nationally, the Natchitoches Jaycees is one of the few chapters that are not co-ed. Pasch said local organizers decided in the 1950s to establish two service organizations for young professionals, Jaycees for men and Les Amies for women. The two groups partner on many of their events.

Pasch also currently serves on the board of directors for the Beta Omicron Chapter of Pi Kappa Phi Alumni Association as director of housing. Of the Jaycee’s 41 members, five are alumni of Pi Kappa Phi. Jason Stelly, David Green, Josh Alost, Chad Hancock and Pasch are all active in the organization.