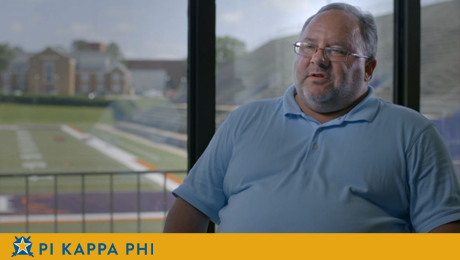 Beta Omicron chapter alumnus Doug Ireland, who is also Northwestern State University’s sports information director, is featured in ‘Delaney,’ a documentary profiling the life and legacy of the Kansas City Chiefs running back who died in 1983 while trying to rescue three children from drowning in a pond. “It’s important to celebrate the life of Joe Delaney, an ordinary Joe with great American values who did extraordinary things as an athlete, and ultimately made an heroic effort and sacrifice,” Ireland said. “His story is timeless and inspiring. Not since Frank Deford’s piece in Sports Illustrated after Joe’s death in 1983 has there been a national media story that truly emphasized Joe’s ties to Northwestern.”

In the short film, Ireland and others reflect on Delaney’s collegiate football and track careers, and subsequent selection in the second round of the 1981 NFL draft. The two were students on the NSU campus at the same time. “He didn’t dress like a star because he was scratching and clawing to provide for a wife and kids while he was in school,” Ireland said. “He was just a country kid with no pretension, no ego, a smile that lit up any room. As they say, he was raised right.”

The running back from Haughton, Louisiana, was AFC Rookie of the Year in 1981 and played in the 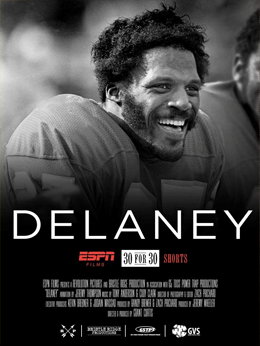 Pro Bowl. Ireland says it was impossible not to root for Delaney. “We watched him struggle to learn how to play running back (at NSU) and his effort was relentless. We saw him put the team above his own best interests by playing hurt the second half of his senior year, and then by staying on the relay team after he got drafted by the Chiefs, instead of stepping away to avoid risking an injury. His NFL success was so gratifying to those who knew him and knew his story. His death was heartbreaking and heroic and tremendously impactful to those whose lives he touched.”

Just days before the start of his third season in the NFL, Delaney died trying to save three children from drowning. On June 29, 1983, he and two of the children never made it out of that pond at an amusement park in Monroe. Delaney left behind his wife and their three young daughters, who are also featured in the film.

NSU has retired his No. 44 Demon football jersey and since his death, no Kansas City player has worn his No. 37. Delaney is immortalized in several ways at Northwestern, including plaques at Turpin Stadium and the Ledet Complex, and with the permanent football team captains receiving Joe Delaney Memorial Leadership Awards annually. The Demons’ spring football game has been known as the Joe Delaney Bowl since 1989 and an award in his name goes each year to an outstanding supporter of NSU Athletics.

Delaney was posthumously awarded the Presidential Citizen’s Medal from President Ronald Reagan, presented by then Vice President George H.W. Bush to the Delaney family. Delaney is enshrined in the Louisiana Sports Hall of Fame, the College Football Hall of Fame and the Chiefs’ Ring of Honor at Arrowhead Stadium in Kansas City.

Former teammates, coaches, sports journalists, and Delaney’s widow and other family members share memories throughout the 20-minute production, painting a picture of the player’s infectious personality and humility.

Curtis directed and produced the feature, most recently serving as executive producer on projects like “Ninja Turtles 2” and “Oz the Great and Powerful.” He previously worked as a producer on  the “Spiderman” movies and “The Gift.”

The film was a culmination of more than a year of interviews, research and editing. “When Grant Curtis and Jeremy Wheeler, the film’s producers, reached out to us for input and suggestions late last spring, it was imperative to provide anything they wanted and might need,” Ireland said. “The NSU family treasures Joe Delaney and this project was a dream come true – world-class filmmakers telling his story for the worldwide leader in sports television. As the point of contact for NSU, and as somebody who was blessed to know Joe, I was determined to maximize the opportunity to share the NSU angle of his story.”

Working with the production team to gather archive film and photos, Ireland also coordinated many of the interviews in the short.”We were thrilled when they decided they had to come to NSU to help tell the story, and although they were here for only five hours, they worked at a frenetic pace to get all the material shot they wanted. They had done the research and preparation and there was not a wasted minute.”

Ireland said the crew was dedicated to providing a definitive understanding of Delaney and his instinctive, selfless actions. “They are now most definitely part of the NSU Demon family and they’ve contributed immeasurably to celebrating one of our most iconic and honorable people.”

‘Delaney’ is being distributed on ESPN.com and Grantland.com.