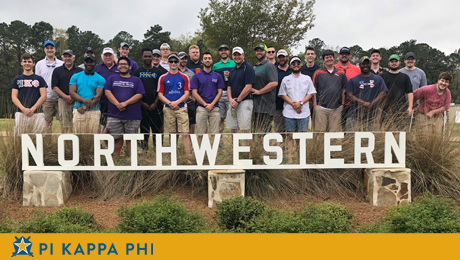 A fantastic turnout made for a competitive and entertaining morning on the links at Pi Kappa Phi Fraternity’s 12th annual golf tournament, held at Northwestern Hills Golf Course in Natchitoches, Louisiana.

On Saturday, March 24, 2018, teams of golfers, made up of alumni of the Beta Omicron Chapter at Northwestern State University, family and friends of the fraternity, and community members teed-off in cool, comfortable weather at Northwestern Hills Golf Course.

Teams of golfers, both competitive and casual, were treated to spectacular weather as they hit the links for Pi Kappa Phi Fraternity’s 12th annual Golf Tournament in Natchitoches, Louisiana.

Two-player amateur teams competed for cash prizes, handed out in an awards ceremony in the clubhouse. First place went to the duo of Kyle and Derek Sandoval. Foster Adams landed the “closest to the pin” contest, while the longest drive went to Jesse Baker.

The tournament is expected to return next Spring for its 13th year. Information on dates and registration will be announced in January 2019.

The annual tournament wouldn’t have been possible without the continued support of individuals and area businesses. Tournament sponsors included: