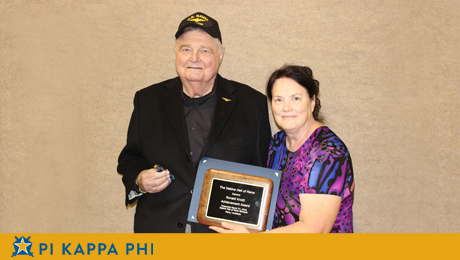 Ronald Knott of Euless, Texas was honored as the recipient of the Sabine Hall of Fame’s Achievement Award on Tuesday, March 27.

Achievement could well be Knott’s middle name, because he has been a Navy fighter pilot, flown for Delta Airlines for over 30 years, authored several books, owned a luxury automobile dealership, and as a real estate developer. More importantly, he has devoted his later years to teaching Bible truths.

At 80 years of age, Knott still possesses a great sense of humor, nicknamed Ron “Astro” Knott and leads an aggressive and full lifestyle of helping others and remaining active in the community.

Born on July 17, 1937, at Allen Clinic in Converse, Louisiana he was the second of twin boys born to Orlando B. and Viola Knott. His older brother by 15 minutes is Roland “Roe” Knott.  Ronald was a complete surprise since there was no way of knowing at the time that his mother was having twins.

Knott laughingly stated, “When the Dr. Lloyd H. Murdock returned from the delivery room a second time to announce that Dad had a second son, they said he almost fainted.”

Dr. Murdock made a riddle about the two boys having the same mother and father, born in the same hospital on the same day and were twins, but “Knott” brothers. 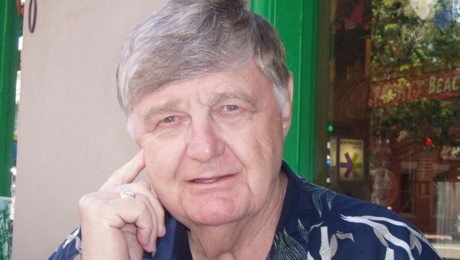 “And so,” the younger Knott stated, “that was how the Knott brothers got started.”

The Knott twins attended school at Noble and those early years were remembered well because World War II was ablaze in Europe and Asia.

“We lived with food and gas rations,” Knott stated.  “Night black-outs were in force and we had to have shades over all the windows so no light could be seen from the outside, so no Japs would bomb Noble.”

He recalls Roe and him gathering scrap iron in the neighborhood to help make ships and airplanes to defeat the enemy.

The Knott twins were on the Noble Mustangs basketball team and played in a tournament almost every weekend.

“Roe and I also played baseball for the Many American Legion team,” he recalled. “Mr. Truman Nichols was our sponsor and his wife and my dad would drive us to the games all over the state of Louisiana.”

“When we played in Natchitoches, Doug Abington of Many would give us hamburgers from his restaurant,” he added. “We won a lot of games.”

When he was in the navy, he told his buddies that he was in the top 10 of his graduating class. Knott, his twin brother and the late Dollie Moore Knippers, who was Sabine Parish Clerk of Court for many years were classmates in a class of 10. The Knotts considered Dollie their sister.

After high school graduation, the twins headed to Northwestern State University in Natchitoches, where both enrolled but didn’t have any idea what career path they wanted to follow.

“Since I was a kid I wanted to be a fighter pilot,” Knott stated. “I got hooked on the fighter pilot stories that came out of World War II.”

He had his only flight when he was a senior in high school.

“I went up for about 15 minutes and I was really hooked after that short flight,” he shared.

There was a flight school nearby the college and Knott saved up enough money to take flying lessons. The cost was $6 per hour and after eight hours of instruction, he completed his solo flight.

Knott recalled that at a Pi Kappa Phi Fraternity reunion a few years ago, everyone made a statement of what college did for them. Lawyers, doctors and teachers praised NSU, but Knott remembered his response.

“The smartest thing I did in college was to cut class and taking flying lessons,” he told his frat brothers.

During his junior year in college, the navy recruiters were on campus. He recalled a poster displayed of a navy fighter flying at a high altitude with the caption, “Be an executive at 40,000 feet.”

Upon inquiring about becoming a pilot, he was told the navy had an awesome program for college graduates.

Following graduation, he headed to Pensacola, Florida, for Naval Flight School, which was an 18-month program with a five-year commitment.

“My flying time in Natchitoches really helped my flight grades in the navy,” he said. “The top students got fighters and the others got transports or helicopters.”

Knott was given a top fighter assignment, not knowing that it had the highest pilot death in the Navy.

“I was assigned to fly the F-8 Crusader, the fastest aircraft of any service in the world at the time,” he said. “It would fly more than 1,000 miles per hour straight and level.  The climb rate was more than 28,000 feet per minute, from take-off to 30,000 feet in only 90 seconds. “We carried 1,000 rounds of 20 mm, four Sidewinder missiles heat seeking, and up to four Zuni rockets,” he added.

The Crusader could maintain air superiority over any nation.

Knott has also landed on the pitching flight deck day and night, which is hazardous duty in rough seas for pilots. Many pilots were lost in such operations.

Usually a cruise was from seven to nine months away from home, with flight operations at least 80 percent of the time.

The navy extended his time on active duty to seven years because of the Vietnam War. He was assigned to be an instructor in Fighter Weapons School, which was the beginning of Top Gun. He noted that after the movie was made, the school was re-named. 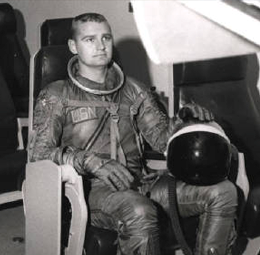 He pointed out, “We worked as a team and the attitudes that Maverick and Ice Man demonstrated in the movie were not put up with.”

After his navy career, Knott joined Delta Airlines as a pilot, but continued to fly the F-8 Crusader in the Navy Reserves.

“I am thankful to say I logged over 25,000 accident-free flying hours for the navy, Delta and civilian aircraft. The Lord was with me,” Knott added.

When Knott signed on with Delta Airlines, the Honorable Representative Cliff Ammons of Many was leading the charge to build Toledo Bend Lake.

“He had the foresight that this would be a good deal for Sabine Parish,” he noted.

“My brother, who was coming out of the Air Force, and I pooled our credit and started buying lakefront property. Later on Leon and Jo Nell Campbell came in as partners,” he said.  “We developed over 10 subdivisions.”

Knott married Sharon Foster of Springfield, Missouri on January 12, 1976. The couple met at a church conference. They are the parents of four children: Keith Knott of Euless, Kimberly Yates of McKinney, Texas, and Kerry Knott and Kristi Knott, both of Euless.

In 1977, Campbell and Knott went into the oil and gas business, Ron Knott & Associates of Converse. They hit it good on some so-called depleted gas wells. Eleven years later, the wells were still producing and allowed the men to support a lot of missionaries and hungry folks with the income.

Along the same time, Knott got a wild idea of importing Mercedes Benz and Porsche automobiles from Germany. This business, World Wide Imports, lasted for 11 years and he was able to sell every car he imported.

Development on Toledo Bend Lake, oil and gas in DeSoto Parish, a car import business and still flying, Knott proved he was industrious. He even had a regular Bible study in his home every Monday evening.

On day a missionary told him that he should write a book. The result of that comment was “Trophies of Heaven.” 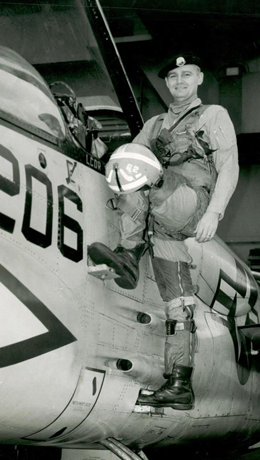 When his children were old enough, they had many questions about flying supersonic airplanes off the deck of short carriers. He answered their questions with “Supersonic Cowboys.”

With the intention of helping others, his Bible students asked that he write a book containing their stories which included their problems with alcohol, drugs, demon worship, prostitution and many other vices. “Testimonies for the Soul” was the result. Their stories shared how they were able to leave their evil lifestyles and get clean.

He is past president of the North Texas chapter of Fellowship of Christian Businessmen. Knott has also appeared on many Christian television and radio talk shows.

Over the years he has penned many other books.

Ten years ago, Knott and several friends purchased an events building on 43 acres of property on scenic Lake Grapevine in Grapevine, Texas. The building, which can hold 1,000 people, is rented for weddings, company meetings and family parties. One of his younger partners takes care of the work and Knott says he’s in charge of all the unnecessary things.

Multi-tasking was taught to him from his Navy days and he has spent many hours of his time in doing so with his many endeavors. However, he is now spending most of his time in the spiritual arena.

He hosts a weekly Bible study in his home, which is attended by 20-40 people. The Knotts have an open door policy at their home on Knott Court in Euless, Texas. Everyone is welcome.

Knott and his wife are generous donors to the needy. They have visited and contributed to orphanages in Russia, Romania, Korea and the Philippines, offering support to those who need them. He is a true philanthropist.

Although he is on dialysis three days a week, he remains active. In his spare time he enjoys watching Fox News. His favorite movie is of course, “Top Gun” and he likes the color blue.

In his life he has practiced the directive, “It is better to give than to receive.” He added, “I’d much rather be on the giving end than having to be on the receiving end.”

Article republished with permission from The Sabine Index.

Ronald Knott’s books can be purchased on Amazon by clicking here.

Safe travels for the 2020 EC as they are off to Dallas for Pi Kapp College!
Rush week is right around the corner! Make sure to stop by the Pi Kapp house to get to know the men of Pi Kappa Phi. If you have any questions please contact our head of recruitment Jacob Norris at 318-403-9560.⭐️ ⚔️
Congratulations to Pi Kappa Phi alumnus Cody Bourque (BO 435) and his beautiful bride, the former Allison Beard. They were married on December 8 at New Orleans' Church of the Immaculate Conception and even had a second line down Canal Street to their reception! Several Pi Kapp brothers were in attendance. Wishing you both a lifetime of happiness!
The Brothers of Pi Kappa Phi would like to wish everyone a Merry Christmas !🎄🎁 #ΠΚΦ
Happy Founders Day! On this day 115 years ago, three men chose to lead. Today we stand with over 100,000 alumni and over 11,000 active undergraduate members. ⭐️ ⚔️ #ΠΚΦ
Happy Thanksgiving from all the Brothers of Pi Kappa Phi! 🦃🍁🍽 #ΠΚΦ
My Tweets