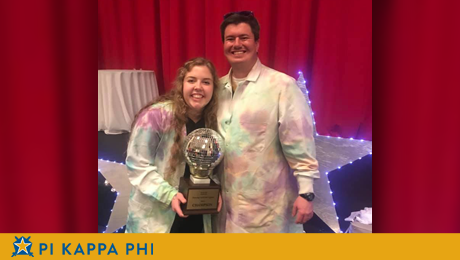 Inspired by the hit ABC television show ‘Dancing with the Stars,’ the NSU event raises money for Tri Sigma’s designated philanthropy, the March of Dimes and Sigma Serves Children.

Raising more than $11 thousand this year, the competition has become one of the biggest charity fundraisers on campus.

10 high-profile Natchitoches-area citizens were paired with members of the Alpha Zeta Chapter of Tri Sigma. Lyles is an assistant professor of Microbiology, while Biscoe is an associate professor of Psychology, and Clark is the owner of Posey’s Sports Center.

Lyles and his partner Libby Blair choreographed an original routine, incorporating theme songs ‘Weird Science’ and ‘Bill Nye the Science Guy,’ earning wild applause from the audience. Their moves were enough to earn the coveted mirror ball trophy and all the bragging rights from the contest.

“I feel so humbled to get this opportunity and secure the trophy,” Blair said.

Lyles took the trophy on a ‘victory tour’ around campus to share his excitement.

“Last night was amazing! Thanks for all the hard work from Libby and the ladies of Tri Sigma for putting on this event!”