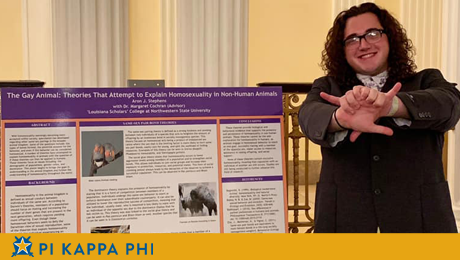 The 2019 conference, held March 29-30, featured over 200 oral presentations, over 100 posters, and several research panels, all offering innovative insights on everything from gender theory to molecular biology.

The junior from Franklinton is a Liberal Arts major with a concentration in Scientific Inquiry and a minor in Biology. He was selected among hundreds of applicants from across the South.

Stephens says his previous selection to present at the National Collegiate Honors Council annual conference helped prepare him for this latest conference.

According to Stephens, his research focused on analyzing theories that attempted to explain why homosexual behaviors occur in animals and why they persist.

“Speaking from a Darwinian and genetic standpoint, these behaviors should have been selected out due to them seemingly violating Darwin’s theories. The conclusions of my research found that although these theories seem to violate Darwin’s theories, these homosexual behaviors actually aid the individuals who partake in it — in having/raising offspring. All of the animals that engaged in this behavior actually had a higher genetic fitness than they did previously. None of them explain exclusive homosexuality though. That is only found in humans. My guess is that that has something to do with our higher cognitive ability.”

He says this research was the result of a final class project and will also present at NSU’s upcoming Research Day in April.